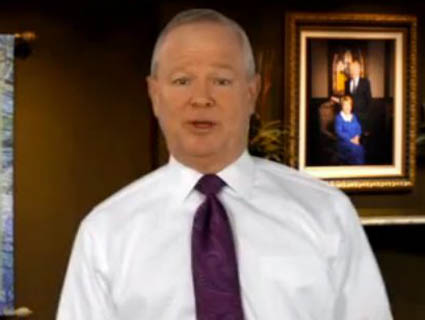 As the Democratic National Convention convened in Charlotte, a super-PAC ad hit the local airwaves with an ad attacking President Obama on same-sex marriage. Bankrolled by the Campaign for American Values, which is headed by former Family Research Council president and ex-Reagan official Gary Bauer, the ad—dubbed “New Morning”—accuses Obama of “trying to force gay marriage on this country.”

Bauer’s super-PAC has raised a war chest of more than $750,000 this election cycle, and nearly two-thirds of that haul has come from a single, mysterious source: a generically-named company called Corporate Land Management Inc., which has given the group $500,000 in donations. In the age of Citizens United, more and more donors have tried to obscure their giving by funneling their donations through hard-to-trace companies and LLCs.

“I’m not authorized to answer any questions at this point,” Corporate Land Management’s registered agent said. “Are you willing to tell me all the confidential stuff people in the government have told you?”

Bauer was circumspect about the origin of the donations. “I’m not going to get into donor relationships, especially not with a publication that I’m sure is not going to be friendly to the effort,” he told Mother Jones.

Corporate Land Management Inc.’s registered agent, a Texas lawyer named John R. Pearce, didn’t want to talk about the company either. Pearce said he could not confirm who runs Corporate Land Management, or even what the company does. “I’m not authorized to answer any questions at this point,” Pearce said. “Are you willing to tell me all the confidential stuff people in the government have told you?”

Incorporation papers, however, identify the director of Corporate Land Management Inc. as Tim Horner. Horner is also the president of Premier Designs Inc., a jewelry company started by his parents that touts its philanthropy on behalf of Christian causes. The address for Corporate Land Management listed in records filed with the Federal Election Commission is the same as Premier Designs’. Horner has personally given almost $50,000 to Republican candidates and causes over the years, and he’s been a regular benefactor of Bauer’s, according to FEC records.

In addition to the Campaign for American Values, Bauer runs a PAC called the Campaign for Working Families, to which Horner has donated $29,500 since 2004. Horner also donated $1,000 to Bauer’s ill-fated run for the Republican presidential nomination in 2000. Mother Jones‘ calls to Premier Designs Inc. went unreturned.

The ad was first reported by Hunter Walker of the New York Observer. It goes like this: A middle-aged woman leans over a granite kitchen counter, her brow furrowing as she reads the newspaper. Her husband, tieless in a blue oxford with rolled up sleeves, asks her how she’s doing. “Fine, I guess,” she says. But we know everything is not fine, because, she says, “Obama is trying to force gay marriage on this country.”

Bauer says: “We only ran it during the convention week in North Carolina, but our goal is to run it in numerous swing states along with other ads on values issues.”

Bauer’s hope is to peel off religiously conservative but politically liberal elements of Barack Obama’s base. “Significant portions of President Obama’s coalition reject a redefinition of marriage,” Bauer says. “I think it’s worth reminding those voters that they may like him on other issues, but have they thought through what his election would mean on that particular issue?”