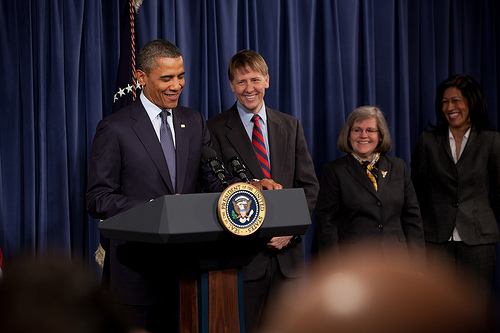 Almost a year ago, President Obama broke liberal hearts everywhere by passing over Harvard law professor (and now Senate candidate) Elizabeth Warren for the director’s spot at the new Consumer Financial Protection Bureau. Warren, who first conceived of the bureau, stood awkwardly at Obama’s side as he named former Ohio attorney general Richard Cordray to head the CFPB. It was an inauspicious start to arguably the most promising piece of the massive Dodd-Frank financial reform law.

So how has the consumer bureau shaped up? In the latest issue of the Washington Monthly, editor John Gravois takes a deep plunge into the CFPB’s first year. He returns to the surface with good news: The bureau remains the best bet for cracking down on predatory lenders, fine-print-hiding credit card companies, and other financial chicanery in the traditional financial markets and beyond.

Gravois paints a picture of the CFPB, in its early days, looking an awful lot like a fledgling tech start-up. The bureau’s makeshift office was “a scene of scuffed carpet, boxes lying about, fluorescent light, and décor the palette of seasickness: greenish pale gray and bruised purple.” Manning the gears at the CFPB weren’t your typical Washington bureaucrats:

Into this vessel, an unusually young, bright-eyed, and idealistic corps of civil servants crammed itself steadily over the course of 2011. The staff grew from a handful to hundreds in a matter of months. Bullpens sprang up in any room much larger than a closet; at one point, there were senior economists working at card tables in the bureau’s heavily cannibalized main conference room.

In part because of its wonky but swashbuckling mission, and in part because of its association with Elizabeth Warren, the bureau has attracted an unusual mix of talent for the civil service. “I’m not someone who ever thought I would work for the government,” says Audrey Chen, a New York information designer whose previous employers included several tech start-ups and Comedy Central. The bureau’s part-time assistant director of research is Sendhil Mullainathan, a MacArthur “genius” grant recipient, Harvard professor, and star of the emerging field of behavioral economics. And numerous other recruits came from high-powered consulting firms or data-intensive advocacy groups like the Sunlight Foundation or Pew, giving the bureau a high-nerdy, service-minded feel: like a McKinsey and Company for the 99 percent.

The bureau has since relocated to nicer, more tastefully colored digs—ironically, in the former headquarters of the Office of Thrift Supervision, a now-defunct bank regulator known for its kneeling deference to subprime behemoths such as Countrywide and Washington Mutual. But what exactly will the CFPB do? Top of the list: arming consumers with clearer, more succinct information about the mortgages or credit cards they acquire:

Ever since the bureau opened a year ago, it has been running experiments on new forms of disclosure—one- or two-page documents rather than novellas of fine print—under a program called “Know Before You Owe.” By posting model disclosure forms online, tweaking them over time, and eliciting feedback from tens of thousands of consumers, the bureau has begun gathering its own data on how people actually process different contract information. Similarly, it has also begun datamining the customer complaints about financial products that it collects.

But that’s just the beginning. The bureau’s research department—which will be made up not only of economists, but also psychologists and marketing experts—is only just getting off the ground, but could one day have the capacity to oversee large-scale randomized trials. At the same time, the bureau is also amassing huge amounts of industry data. Soon, it will have access to account-level information from nine of the largest credit card issuers—a far larger database, in other words, than what any individual issuer has on its own.

So what will the bureau do with all this information? In much the same way that companies use all their data to figure out exactly how best to profit from their customers, the bureau will use data to decide exactly how best to hold the market to the standards outlined in Dodd-Frank—how to keep it fair, transparent, and competitive; how to make sure that it is not abusive or deceptive; and how to make sure it supplies consumers with information that is timely and understandable.

Make no mistake, the CFPB is vulnerable to the same ills that plagued the OTS, the Securities and Exchange Commission, and the other financial watchdogs who dozed off or looked the other way in the lead-up to the 2008 financial meltdown. The bureau could get too cozy with the outfits it regulates, known as “regulatory capture.” A President Mitt Romney or some other future GOP commander-in-chief could sign GOP-passed legislation defanging the bureau, or could install a do-nothing director, scaling back the zeal needed to chase down law-breaking payday lenders or credit card companies. But for now, as Gravois shows, the bureau is off and running.