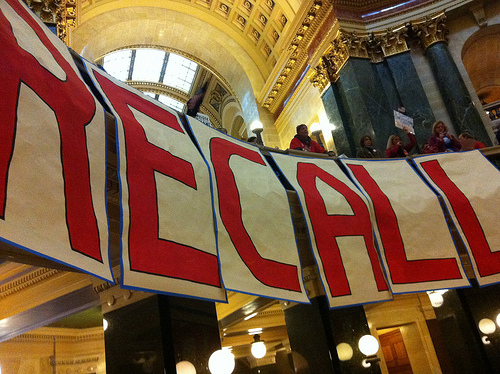 Voting in Wisconsin Gov. Scott Walker’s recall election is underway, but it’s far from the only recall election happening this year. There are 17 recalls in four states scheduled for Tuesday alone. According to Joshua Spivak, an expert on recalls in American politics, 2012 is on pace to surpass last year’s all-time record of 151 recall elections.

For the first half of 2012, Spivak’s recall count is at 103 in 17 states. That includes recalls that have taken place, been scheduled, or have prompted the official facing recall to resign. Here’s more from Spivak:

The recalls are against all types of officials, Six mayors have been removed, five have survived, and another four are facing a recall vote.

The reasons for the recall span the spectrum. Some of the more noteworthy ones including opposing another member’s appointment of his girlfriend to the village council, trashing a hotel room, and one launched by the wife of a losing candidate. In one ongoing recall attempt, we have the official facing charges of rape, pimping, pandering and maybe attempted murder (don’t worry, that was just a school board member). Last year, we had a school board member facing a recall who was caught sexting with a 14 year old. That was not the reason for the recall (it came out during the campaign).

Among other nuggets are that the mayors of both Troy, Montana, and Troy, Michigan, are facing recalls (the mayor from Montana lost). And while it may be time to stop all of your weeping and swallow your pride, the mayor of Tombstone, Arizona, was recalled. And yes, he was replaced by the owner of Johnny Ringo’s bar, who will now be your huckleberry.

In summary, we should be ahead of last year’s pace. The big caveat, outside of the fact that I may be missing a number of recalls both this year and last, is that this is a presidential election year, not an off year election. I think it is possible that there may be less recalls on Election Day than last year (there were 30 on the first two Tuesday’s in November). Perhaps people will be more focused on the presidential race, and will ignore recalling local officials. Of course, the opposite could occur. We will see in November.