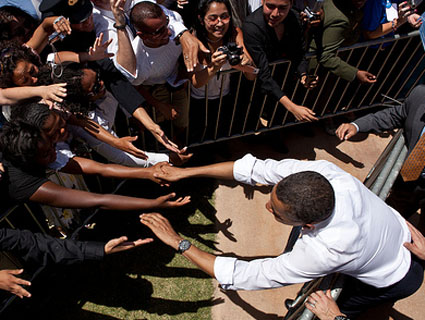 Obama shakes hands with supporters following a speech on immigration reform in 2011. <a href="http://www.flickr.com/photos/whitehouse/5740839189/sizes/m/in/photostream/" target="_blank">Flickr/White House</a>

It was President Obama’s turn to address the National Association of Latino Elected and Appointed Officials on Friday, the day after Mitt Romney spoke to the same group. Obama emphasized his commitment to passing the DREAM Act and comprehensive immigration reform. He reminded the audience that he voted for President George W. Bush’s immigration reform bill as a senator, and that the bill had been scuttled by immigration restrictionists from Bush’s own party.

The president’s reception at NALEO was very warm—he drew several standing ovations. His defense of his decision to exempt DREAM Act-eligible unauthorized immigrants from deportation was well-received. “They are Americans in their hearts, in their minds, in every single way but on paper—and all they want is to go to college and give back to the country they love,” Obama said. “Lifting the shadow of deportation and giving them a reason to hope was the right thing to do.”

Obama didn’t mention Romney by name, but he did refer to his rival’s pledge to veto the DREAM Act. “Your speaker from yesterday has a different view,” Obama said. “In his speech, he said that when he makes a promise to you, he’ll keep it. Well, he has promised to veto the DREAM Act, and we should take him at his word.”

The president also directly blamed Republican partisanship for the collapse of immigration reform efforts. Here’s the key section of his speech:

In the face of a Congress that refuses to do anything on immigration, I’ve said that I’ll take action wherever I can. My Administration has been doing what we can without help in Congress for more than three years. And last week, we took another step. On Friday, we announced that we’re lifting the shadow of deportation from deserving young people who were brought to this country as children. We should have passed the DREAM Act a long time ago. It was written by members of both parties. But when it came up for a vote two years ago, Republicans in Congress got together and blocked it. The bill hadn’t really changed. The need definitely hadn’t changed. The only thing that had changed, apparently, was politics.

This is not an entirely accurate portrayal of events. Republicans did band together to block the DREAM Act, including several former co-sponsors of previous versions of the bill. But they were joined by skittish centrist Democrats. The final vote was 55 to 41, with five Senate Democrats joining the opposition. Had Obama delivered the votes of his own party, the DREAM Act would have passed. And if Republicans who previously supported the legislation hadn’t decided it was terrible after Obama supported it, it would have passed.

The president has a big advantage over Romney with Latinos, but his task is arguably harder. With little progress on reform but a verbal commitment to policies Latino voters prefer, Obama has to seriously energize Latino voters to have a chance at retaining the Oval Office. Romney, on the other hand, doesn’t have to win a majority of the Latino vote—he just has to convince enough of them he wouldn’t be that bad.