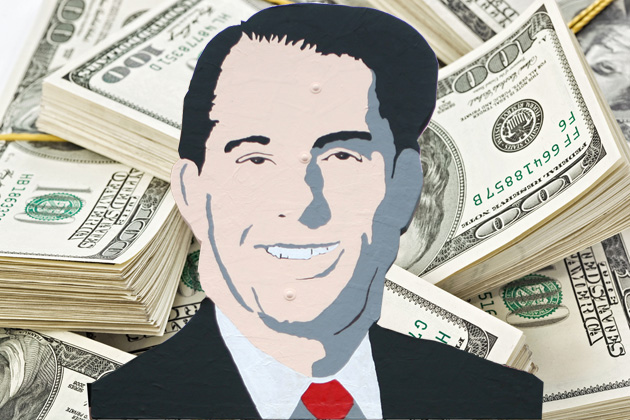 It’s not surprising, then, to learn that out-of-state money is pouring into the Walker recall at a record pace—and it’s powering the efforts of Democrats, Republicans, interest groups, and unions alike.

In Wisconsin’s 2006 gubernatorial election, as the Milwaukee Journal Sentinel reports, out-of-state campaign donations made up 15 percent of all donations. In 2010 it was 9 percent. But in the Walker recall? It’s a staggering 57 percent.

According to an analysis by the political-money-watching Wisconsin Democracy Campaign, $3 out of every $5 raised by Walker came from outside Wisconsin. Walker’s largest donors include Texas homebuilding king and Swift Boat for Veterans backer Bob Perry, Las Vegas casino tycoon Sheldon Adelson, and Richard DeVos, heir to Amway fortune. A little more than $1 of every $10 given to Barrett was out-of-state campaign cash.

Walker raised $13 million in the first three months of 2012, bringing his total fundraising haul since January 1, 2011, to $25 million. Walker benefitted from a quirk in state election law allowing him raising unlimited campaign cash for months to fend off the recall challenge. Barrett raised $750,000 in the first 25 days after entering the race in late March.

Interest groups bankrolled by out-of-state cash are also playing a pivotal role in the recall. The Republican and Democratic Governors Associations, both based in Washington, DC, have together ponied up nearly $7 million for the Walker recall. The RGA, as Mother Jones has reported, is the GOP’s corporate-funded dark money machine, shuffling tens of millions in campaign cash to boost Republicans and bash Democrats nationwide. Labor unions have pumped millions more into the groups We Are Wisconsin, which supported Democrats in last summer’s state Senate recall races and supports Barrett now, and Wisconsin for Falk, which supported Kathleen Falk in the recall Democratic primary and opened field offices around the state.