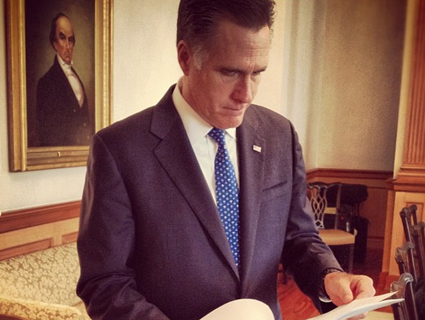 On Tuesday, GOP presidential nominee Mitt Romney released his birth certificate. The timing was fitting—it came the same day he was scheduled to appear at a Las Vegas fundraiser hosted by Donald Trump, the real estate magnate and reality television star who has spent much of the last year promoting conspiracy theories about President Obama’s place of birth and his intelligence.

As one leading conservative activist put it, “A ‘birth certificate’ and a ‘certificate of live birth’ are in no way the same thing, even though in some cases they use some of the same words.” That was Donald Trump.

On Wednesday, Michigan Democrats circulated a video of Rep. Pete Hoekstra, who’s seeking the GOP Senate nomination in that state, proposing the creation of a federal birther committee to inspect presidential candidates’ birth certificates and determine their veracity. “[W]e lost that debate in 2008, when our presidential nominee said, ‘I ain’t talking about it,'” Hoekstra says, in response to a question about Obama’s birth certificate. Obama did released a certificate of live birth in 2008, so presumably Hoekstra deemed that insufficient.

We missed the press release from Trump, Palin, and Hoekstra demanding Romney come clean with his long-form birth certificate. Maybe they sent it to the wrong address? I’d just hate to think that this four-year-long muckraking quest for more documentation of the President’s place of birth was all just a cynical race-baiting ploy or something.