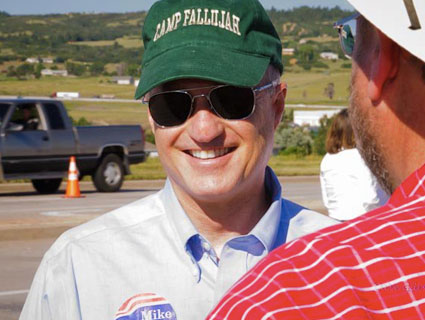 Rep. Mike Coffman (R-Colo.)—last seen in these parts warning that undocumented immigrants would vote en masse for Obama this fall—suggested at a fundraiser last weekend that President Barack Obama might not have been born in the United States. It was awkward:

After a short pause, which Elbert County Republican Chairman Scott Wills recalled as “deafening silence,” Coffman was met with applause, tentative at first.

This comes just one month after another GOP freshman, Missouri Rep. Vicky Hartzler, expressed her own doubts about the President’s place of birth.

Okay, so birthers are still a thing, and will probably always be a thing; cut the head off a conspiracy theory and it sprouts eight more. (There are still people who maintain that Zachary Taylor ate poisoned cherries!) But here’s the problem for Coffman: As David Nir notes, Coffman’s not running in the same district that elected him in 2010:

Colorado’s 6th Congressional District was made significantly bluer in redistricting, going from a seat John McCain won by a 53-46 margin to one Barack Obama won, 54-45. That’s made Coffman extremely vulnerable this year, yet he’s still acting as though he’s running in the district that repeatedly elected Tom Tancredo to Congress.

The Democratic Congressional Campaign Committee has listed Coffman’s seat as a “Red to Blue” pickup, meaning it’s going to be a top battleground in the fall. Running a birther campaign and smearing Latinos—a rapidly growing demographic in the Mountain West—might not be the best strategy if he wants to keep his job.