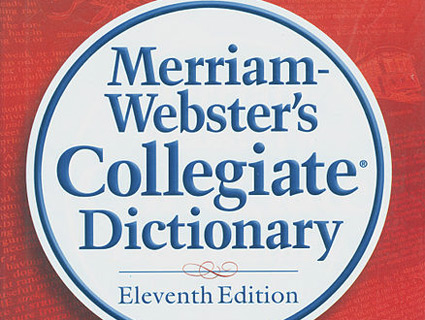 A recent study by the Sunlight Foundation found that Congress is a lot like Benjamin Button. But instead of reverse-aging, members of Congress are regressing in their ability to form complex sentences.

According to the analysis, members of the House and Senate currently speak at roughly a 10th grade level—almost a full grade lower than in 2005. Republicans come in at a 10.4 grade level average, while Democrats perform slightly better at a 10.8. (The study was based on algorithmic analysis—similar to methods used to chart Congressional buzzwords—of floor speeches delivered through April 25, 2012.)

Politico has a rundown:

The study also revealed that only 10 members of Congress have used at least 20 of Kaplan’s 100 most common SAT words so far in the current session of Congress, while just 92 members have used at least 10 of those words…[T]he U.S. Constitution is written at a 17.8 grade level, the Federalist Papers at a 17.1 level, and the Declaration of Independence at a 15.1 level (an analysis by the University of Minnesota showed that President Barack Obama’s State of the Union this year had an 8th grade comprehension level – the third lowest score of any SOTU address since 1934).

Here’s are a couple of charts from the study: 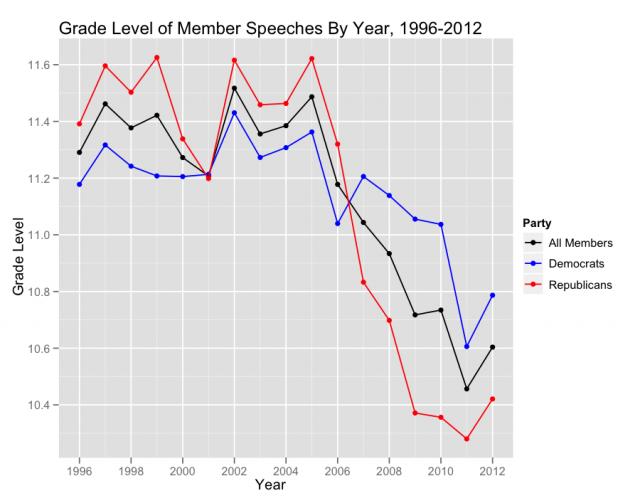 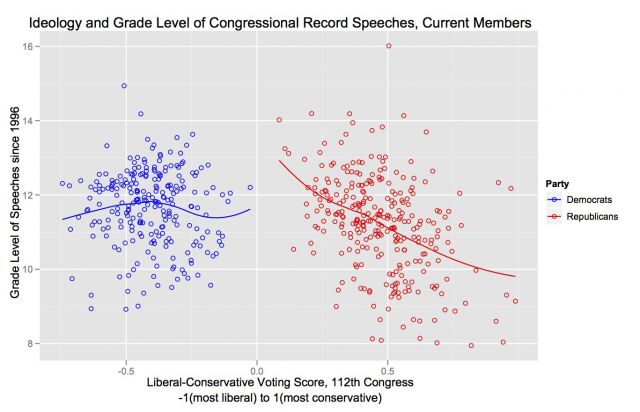 On its surface, this will probably read like yet another cue to bash the stupidity of our much-derided Congress. But determining the substance or effectiveness of something based on its “grade level” isn’t an exact science. People might want to keep this fact in mind:

All journos mocking Congress for speaking at a 10th grade level shud remember that newspaper writers aim for 8th grade. (6th is better)

You could plausibly argue that our nation’s rhetoric has been somewhat dumbed down over the past few years. But great politicians have always tried to speak in populist terms. It shouldn’t shock anyone to learn that elected officials don’t often channel Aaron Sorkin. If you want to mock the 112th Congress, you run the risk of looking silly if you chuckle at politicians’ word choices or the length of their speeches.

Instead, simply highlight their ideas.