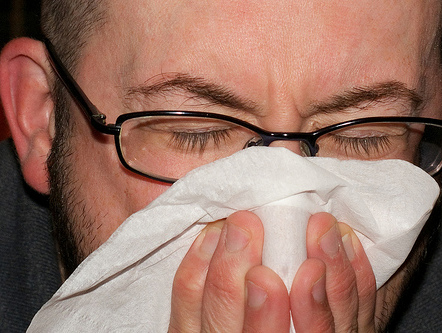 Are you an urban-dweller who suffers from allergies? Maybe you need more bacteria in your life, according to a new paper published in the Proceedings of the National Academy of Sciences.

According to the “biodiversity hypothesis,” reduced contact of people with natural environmental features and biodiversity may adversely affect the human commensal microbiota and its immunomodulatory capacity.

The National Library of Medicine says that allergies are an “exaggerated immune response or reaction to substances that are generally not harmful.” In other words, your body flips out over pollen, even though it has no real reason to do that, mostly because it’s bored. And exposure to a diverse range of bacteria helps build up your immune system, training it to respond to things it really needs to deal with.

Anecdotally, this has been true for me. I grew up on a farm, playing in mud puddles, eating lettuce straight out of the field, swimming in ponds. I had no idea what allergies were. But shortly after moving to DC, which is among the worst cities for allergies, I was besieged by horrible sniffles, sneezes, runny eyes, and constant itchiness. And I’ve met a fair number of other urban-newcomers who suffered the same fate. So maybe we all just need to get out—outside, in real nature—more often.