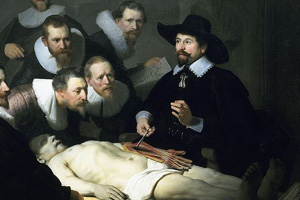 The Anatomy Lesson of Dr. Nicolaes Tulp by Rembrandt van Rijn /<a href="http://commons.wikimedia.org/wiki/File:The_Anatomy_Lesson.jpg">Wikimedia</a>

The 1995 Chicago heat wave was one of the most brutal weather events the United States has ever experienced. On July 13, the thermostat hit 106 degrees. Many of the city’s poor and elderly residents had no air conditioning; many of those who did lost power as blackouts swept the city. Soon, thousands were suffering from dehydration, kidney failure, and respiratory distress. The hospitals were overloaded; the city couldn’t cope with the flood of 911 calls. Over the following days, more than 600 people died from heat-related illnesses, with hundreds of bodies temporarily stored in refrigerated meat trucks because the city morgues were full.

The Chicago disaster was the worst heat wave in recent US memory. But if greenhouse gas emissions continue on their current path, health experts say catastrophic heat waves are likely to become far more common. Heat-related deaths in Chicago are expected to quadruple by 2050, up from the current annual average of 182, according to the US Global Change Research Program, a government study. Rising temperatures and accompanying atmospheric changes will alter disease patterns and aggravate all manners of medical conditions, from asthma to respiratory diseases to—believe it or not—kidney stones. In May 2009, the medical journal The Lancet and University College London’s Institute for Global Health issued a major report concluding that climate change is the “biggest global health threat of the 21st century.”

All of this means new costs for the US health care system—which will almost certainly be passed on to consumers in the form of higher insurance premiums. What is the insurance industry doing to prepare?

So far, not much. In 2008, the National Association of Insurance Commissioners, the group representing state government regulators of property, health, and life insurers, announced that all such companies would be required to report both the risks and opportunities that climate change poses to their businesses. Some were eager to get started. Property insurers, says Joel Ario, chair of NAIC’s climate task force, “are probably the only people I know who are more worried about climate change than the environmentalists.”

But the health insurers have been resistant. In a survey by NAIC, America’s Health Insurance Plans, the industry’s powerful lobby group, responded that it “has not adopted specific practices to identify climate change-related risks.” It added, “While we continue to monitor climate change as it pertains to the global health care situation there is no conclusive information currently available to address the effects of climate change on health care.” The American Council of Life Insurers argued in a letter that “knowledge in this area is not sufficiently developed to warrant an immediate, significant, costly, and possibly damaging change to the content and nature of annual statement reporting.” After pushback from the broader insurance industry, NAIC made disclosure voluntary on a state-by-state basis. (Some states intend to move forward with the mandatory disclosure policies as planned.)

It’s true that there are many unanswered questions about exactly how rising temperatures will affect human health. But there’s mounting evidence that the impact will be significant, according to major research efforts from the Environmental Protection Agency, the Intergovernmental Panel on Climate Change (IPCC), the World Health Organization, the National Institutes of Health, and the calls climate change “an environmental health hazard of unprecedented scale and complexity.”

Climate change, it turns out, has a few side effects. High temperatures make it harder for the body to cool itself, which can cause heat cramps, exhaustion, and stroke—a particular concern for people with heart conditions. Heat also affects air quality, as stagnant air leads to higher smog concentrations, which in turn places stress on those with respiratory conditions like asthma. Higher levels of carbon dioxide will likely cause pollens to proliferate, while increased humidity will nurture fungal growth—two major aggravators of asthma and allergies. Hotter weather will also lead to the spread of disease. Mosquitoes carrying diseases like malaria, West Nile virus, and dengue fever will migrate into new areas of the US. So will ticks bearing Lyme disease. Water- and food-borne pathogens also thrive in balmier climes.

In some places, winters will be warmer—but that creates problems, too. Increased precipitation is expected to trigger heavier snowfalls and more ice storms, leading to more accidents and falls, says Paul Epstein of the Center for Health and the Global Environment at Harvard Medical School. A 2009 report from the US Global Change Research Program found that any decrease in hypothermia-related deaths thanks to warmer winters “will be substantially less than the increase in deaths due to summertime heat extremes.”

The US health care community is so far behind on the issue of global warming that it’s only starting to calculate the cost of these changes. But what little research exists suggests the bill could be big. Lyme disease already costs more than $2.5 billion a year in medical expenses and lost work time—and climate models predict that the area where Lyme-carrying ticks can survive will more than double over the next 70 years. Any increase in asthma would likewise boost the condition’s massive price tag—currently $18 billion annually. A study published in the Proceedings of the National Academy of Sciences found that kidney stones could increase by 30 percent or more in some areas of the US, due to dehydration. That would cost the US health care system more than $1 billion per year.

These are just a few of the anticipated health effects—accumulated, they could pose a major liability for insurers. It’s a “time bomb,” says Michael Gresty, managing principal of the sustainability consultancy Altanova, which works with corporate clients to reduce risks in this area. “When the industry is not prepared for a sudden shock like this, they either have to dig into their reserves, or they have to increase their premiums to cover the increased costs of providing care.”

On the bright side, one underappreciated benefit of tackling climate change is that it could yield major health care savings. The European Environment Agency has found that the European Union’s plans to reduce carbon emissions 20 percent by 2020 would cut health costs by $44 billion dollars annually. No equivalent analysis has been done for the US. But a study by the Clean Air Task Force found that shuttering dirty coal plants could save more than twice as many lives as seat belts do each year. Programs to reduce emissions, like providing better public transportation, could also result in indirect health care savings by way of lower obesity rates and fewer respiratory and heart problems. And a January study from the University of Wisconsin found that the benefits of improved air quality that would come from weaning the country off fossil fuels would likely outweigh the short-term costs.

Some insurance firms are beginning to acknowledge that climate change may affect their businesses. In a 2008 submission to the Carbon Disclosure Project—a voluntary program that helps major businesses assess climate change-related risks—Prudential said it had teams examining the implications of increased infectious disease and extreme weather events. The company is also “paying attention more” to markets like Mexico, India, and China, where diseases like malaria may spread, says Mary O’Malley, chair of Prudential’s environmental task force. But, she says, Prudential is only starting to evaluate the risks and hasn’t made substantial changes to its business model. Likewise, Aetna concluded in a submission to the disclosure project that global warming may lead to “higher health care costs for everyone.” But it, too, is in the early stages of assessing the problem.

Smart insurers, says Gresty, should work to calculate climate-related risks and push for policy changes to reduce those risks. “That would be an investment in the future that would be protective of their business,” he says. And given the industry’s massive lobbying tab, policymakers might well listen. Says Harvard’s Epstein, “Through their own policies as well as national policies, the insurers can have a huge voice.”