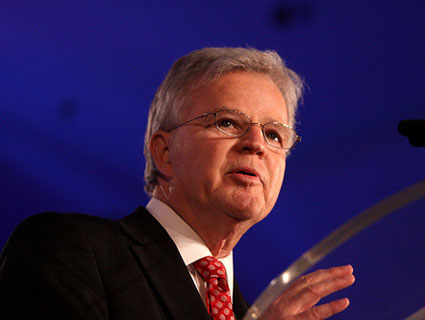 “We’ve got to redefine America!” Buddy Roemer roars, sounding exactly like the former Congressman, ex-governor, and current presidential hopeful that he is. But what he says next is a bit of a departure from campaign-trail boilerplate. “Look at Southwest Airlines!” he shouts. “Who here likes Southwest?! I love Southwest! No numbers, no lines, you sit wherever you want! They’ve redefined the airline!”

“And look at Cirque du Soleil!” he goes on. “Look at what they’ve done! No popcorn, no sodas! No animals!” Roemer looks incredulous. “No animals!“

Buddy Roemer, you might say, is seeking to redefine the circus. Having had it with both the Democrats, who first made him a Congressman in the 1980s, and the GOP, his party for the past quarter-century, he is running for the nomination of the Reform Party. It’s slow going—the campaign event I attended was held in a small classroom on the University of California-Berkeley campus, with maybe 30 students and aging hippies in attendance.

But Roemer didn’t let that slow him down. A banker by trade, he laid into Obama and his banker buddies: “After he signed financial reform into law, he attended a fundraiser that was $30,000 a head!” he said in a measured, yet disgusted tone before shouting, “Hypocrite!” Don’t let the elfin charm fool you—Roemer’s got a fire in the belly. His financial reform blueprint includes reinstating the Glass-Steagall Act, raising banks’ capital ratios, and outlawing big bank bailouts. He’s also calling for a ban on Super PACs, and large campaign contributions, instant disclosure of all political donations, and criminal penalties for violators. His own self-imposed donation limit? A hundred bucks. No wonder he’s won the love of the left, from Occupy to Maddow to Colbert.

But Roemer is quick to point out that he remains a conservative at heart: He’d cut entitlement spending and public employees, get that Keystone pipeline going and frack the country dry. “We oughta tap those wells out,” he says. The Pentagon budget deserves a “scrubbing,” he says, but the world is “a dangerous place” and we need “healthy” defense spending.

He might be a mind-bender for Americans used to something a bit more traditional. But then, so is Cirque du Soleil.