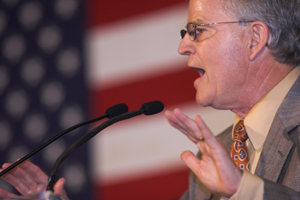 The big 2012 news this week (well, other than this) is that former Louisiana Gov. Buddy Roemer is forming a presidential exploratory committee. So who the heck is Buddy Roemer? Politico‘s Jonathan Martin had a must-read take this morning, but here’s a closer look:

A former Democrat: Roemer was a four-term Democratic congressman from Shreveport, but switched parties midway through his first and only term as governor. Although he supported President Reagan’s economic policies in Washington, Roemer said the party’s lingering racism was holding it back: “The only thing that is keeping me from being a Republican is the Republicans.” He finally made the switch in 1991 in the hopes that it would help his re-election chances (it didn’t). For his switch, Roemer’s critics took to calling him a “transvestocrat.”

A New-Age Mystic: As part of a very public mid-life crisis, Gov. Roemer began wearing blue jeans and adopted the slogan, “Goodbye to me, hello to we.” Here we’ll quote from Charlie Trueheart’s 1991 Washington Post story:

“[H]e and his erstwhile Roemeristas (so called because of the much-touted but since-wilted “Roemer revolution”) have been reduced to mouthing the ridiculous platitudes of Robert Fulghum and other New Age shamans. Cook reports, “He packed himself and his staff off to motivational treats dubbed ‘Adventures in Attitudes,’ where they learned to banish negative thoughts by snapping a rubber band against their wrists while uttering ‘Cancel, cancel.'”

Not a culture warrior: Roemer’s no lefty: He supported chain gangs and presided over the execution of a mentally handicapped man who had murdered a state trooper at the age of 17. But in one of the signature showdowns of his political career, Roemer opposed his base: As governor in 1991, he vetoed a GOP proposal that would have banned all abortions, except in the case of rape or incest—and even then, abortions could only be performed in the first 13 weeks of a pregnancy, and the rape or incest victims had just five days to report the crime. The bill passed into law over his veto, but was later blocked by a federal judge. The National Right to Life Committee called Roemer’s veto “a betrayal.” Roemer also signed a law legalizing medicinal marijuana in Louisiana, and vetoed a bill that would have restricted the sale of profane music like 2 Live Crew.

But he is a fiscal warrior: A “Boll Weevil” Southern Democrat in Congress, Roemer supported President Reagan’s 1982 tax cuts. Faced with a $700 million deficit as governor, he proposed a dramatic overhaul of the state tax code—including increasing the sales tax (the proposal was blocked) and cutting more than $200 million in spending. After leaving politics, Roemer took a job as a CEO of a small bank, which, he takes pains to note, did not receive bailout funds.

Didn’t he once lose an election to David Duke? Yes. He also lost to Edwin Edwards, a former governor who had previously been indicted for mail fraud and has since served time in federal prison for corruption. But that’s all sort of normal in Louisiana. For his part, Roemer sided with the crook over the Klansmen. As he explained: “I could never vote for Duke. Too much hate. Too much hurt. Too little truth.” Poetry.

He’s from Louisiana; has he ever been indicted? No.

Paging Andy Card: This is kind of funny:

“When a new Japanese consul general for New Orleans called on Roemer by appointment at the executive mansion, the governor received him in blue jeans with his feet up on the table. The consul general, deeply offended, publicly rebuked the governor.”

Bottom Line: Roemer isn’t going to be our 45th president. As Martin notes, very few people have any idea who Roemer even is. Fundraising is also going to be a problem: He’s vowed not to take any money from PACs, and is limiting individual donations to $100. Slate’s Dave Weigel says Roemer projects to be “Duncan Hunter/Mike Gravel sort of candidate.” As a fan of performance art, I’m hoping it’s the latter.