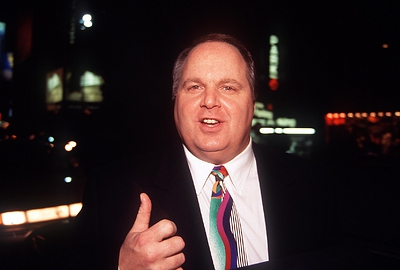 The “Hall of Famous Missourians,” a series of busts in the rotunda of the Missouri state capitol, honors the state’s history makers, among them native sons and daughters, from Florida, Mo.-born writer Mark Twain to St. Louis Cardinals ace Stan Musial, from Walt Disney to Sacajawea. Now, in a feat of exquisite timing, comes news of the latest addition to the Missouri citizenry’s hall of fame: Rush Limbaugh.

This is not a hoax. The foul-mouthed, Viagra-popping, blowhard par excellence of the conservative airwaves will be added to the Hall of Famous Missourians in Jefferson City later this spring, according to the St. Louis Post-Dispatch.

House Speaker Steven Tilley, R-Perryville, confirmed Monday that Limbaugh, who, like Tilley, hails from southeast Missouri, will be honored with a place in the Hall of Famous Missourians, a circle of busts in the Capitol rotunda recognizing prominent Missouri citizens.

The statues are paid for with private funds raised by the speaker.

The unveiling is not expected until closer to the end of the legislative session in May, but, last month, a Kansas City artist published an announcement on his website indicating he was working on sculptures of Limbaugh and Dred Scott, whose landmark slavery case was heard at the Old Courthouse in St. Louis.

Rush Limbaugh and Dred Scott. Talk about a bizarre Class of 2012.

The timing, of course, couldn’t be worse for state house speaker Tilley. Limbaugh ignited a national controversy when he branded Georgetown University law student Sandra Fluke a “slut” and a “prostitute” for testifying in support of the Obama administration’s mandate (which includes a religious exemption) that health insurers and employers cover birth control. Twenty of Limbaugh’s advertisers (and counting) have ditched his hugely popular radio show. Limbaugh mustered several weak apologies in recent days, but they’ve done little to quell the furor over his comments while doing much to show Limbaugh’s ignorance of the basic facts of how birth control works.

Perhaps Limbaugh should have heeded the sly wisdom of Twain, a fellow Hall of Famous Missourians inductee, who once said, “Get your facts first, and then you can distort them as much as you please.” In the case of Sandra Fluke, Rush Limbaugh failed to do even that much.