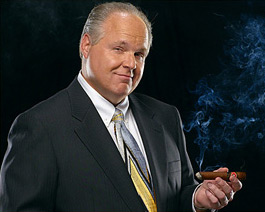 Rush Limbaugh is quoted in a new Spanish-language Obama ad that ties John McCain to the nativist fringe of the Republican Party. The ad itself isn’t exactly fair — McCain has showed a willingness to kowtow to that nativist fringe, but he’s still probably the GOP’s leading advocate for a humane approach to immigration reform. But Limbaugh doesn’t believe in that humane approach, and in a Wall Street Journal op-ed published today, he isn’t standing up for John McCain’s record on immigration issues.

Instead, he’s arguing that he isn’t as big a jerk as the quotes in the Obama ad make him look. Limbaugh notes the quotes and then provides the full paragraphs from which they came, with the mistaken belief that somehow the context proves he isn’t a bigot. In fact, the context just reinforces the original point. See for yourself.

“If you are unskilled and uneducated, your job is going south. Skilled workers, educated people are going to do fine ’cause those are the kinds of jobs Nafta is going to create. If we are going to start rewarding no skills and stupid people, I’m serious, let the unskilled jobs that take absolutely no knowledge whatsoever to do — let stupid and unskilled Mexicans do that work.”

“You shut your mouth or you get out!”

“And another thing: You don’t have the right to protest. You’re allowed no demonstrations, no foreign flag waving, no political organizing, no bad-mouthing our president or his policies. You’re a foreigner: shut your mouth or get out! And if you come here illegally, you’re going to jail.”