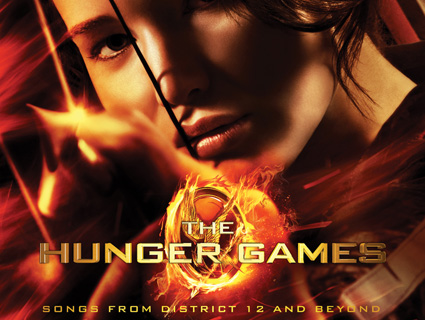 Various Artists
The Hunger Games: Songs from District 12 and Beyond
Universal Republic

The soundtrack to the highly anticipated film version of The Hunger Games (opening Friday) draws inspiration from the futuristic Appalachia that’s home to Katniss, our young protagonist. Funny, then, how it sounds much like a playlist one might create from some of this era’s hottest indie, roots, and pop stars. Featuring tunes from the likes of The Decemberists, Taylor Swift, Arcade Fire, and Punch Brothers, the star-studded roster didn’t exactly transport me into author Suzanne Collins‘ post-apocalyptic world. But The Hunger Games: Songs from District 12 and Beyond has its moments. Its piercing lullabies, for instance, ring true to the story’s emotional angst and loss of innocence, and…District 12 makes for good listening, even if its intended identity is never fully clear.

Set in a future Dark Ages, Collins’ dystopic young-adult trilogy reimagines America as a feudalistic society controlled by a decadent Capitol where reality TV, plastic surgery, and brutal repression reign supreme. Katniss lives in one of 13 zones under the Capitol’s control, a mining province called District 12. The plot surrounds a morbid annual competition forced on the impoverished districts, each of which—in a distant echo of Shirley Jackson’s classic short story “The Lottery”—must select two of its teenagers to battle to the death in the Capitol’s surrealistic amphitheater until one champion remains. The battle is broadcast as entertainment for the citizens of the Capitol, whose hunger for melodrama rivals the literal hunger of the combants and their families back home. Katniss is a scrappy and fearless heroine (weapon of choice: bow and arrow). The story centers on her struggles to protect her younger sister and mother, choose between love interests, and, oh, yeah, dodge her bloodthirsty opponents.

The film, starring Jennifer Lawrence of Winter’s Bone fame, was a phenomenon well before its March 23 release, spawning fan sites and anticipatory slideshows and pair-your-dish-to-a-scene feast competitions. And now this companion album, loosely inspired by District 12 and its haunted inhabitants.

Arranged by T-Bone Burnett, the musician and producer best known for the widely acclaimed Oh Brother, Where Art Thou? soundtrack, …District 12 seems undecided about its audience. For one thing, perhaps its most-publicized contributor is teen pop-country queen Taylor Swift. Don’t get me wrong. I can handle Swift’s glossy vocals when the mood is right, but usually that involves driving down the California interstate with a lemonade in hand. Swift’s two contributions—one with the harmonizing duo The Civil Wars—linger in the unquestionably pop universe. I couldn’t help feeling that the stoic huntress Katniss deserved a stronger, less breathy voice as her main representative—Neko Case’s contribution, “Nothing To Remember,” seems more in line with Katniss’ fearlessness—and that including Swift was more a business move than an artistic one. After all, Collins’ trilogy is aimed at teenage readers, and Swift is huge with that demographic.

But plenty of adults appreciate the books too, and Burnett’s inclusion of a hearty dose of roots music nudges the album closer to its goal of envisioning “what Appalachian music will sound like in 300 years.” Punch Brother’s “Dark Days” is a prime example. The mandolin-laced tune features Chris Thile’s clear tenor with great harmonies, and fiddle lines as lonesome as a pining heart. His lyrics echo the storyline:

Sister hide our love away/ from the evil we both know / It can see you through these dark days, though they seem to darken as I go / Our love will see us through these dark, dark, days/ Sister, till it lights the way back home.

Another line, “But we don’t have to reap the fear they sow,” seems a direct reference to “the reaping”—the ritualistic event in which the young “tributes” are plucked away from their families and sent to the Capitol to prepare for their last stand.

Other standouts include the mournful hymn “Daughter’s Lament” by the Carolina Chocolate Drops, Miranda Lambert’s country tune “Run Daddy Run,” and The Secret Sisters’ gentle lullaby, “Tomorrow Will Be Kinder.” The Sisters’ Alabama roots and soothing harmonies make this tune fitting both for District 12’s rural locale and as accompaniment for the lighter side of Katniss’s shadowy adolescence.

Much in the same way our heroine is thrust from the sheltered cove of her childhood, this album, too, shifts to embark on something much darker. One of the surprise successes is hip-hop star Kid Cudi’s “The Ruler and the Killer,” a pulsing, rhythmic chant that embodies the demonic competition and the evil puppetmasters controlling the show. (At the start of the games, Katniss describes “a dozen or so tributes hacking away at one another…Several lie dead already on the ground”). For that matter, the opening track, Arcade Fire‘s “Abraham’s Daughter,” also sets an eerie and prophetic tone with childlike chants overlaying minor chords, agressive drumming, and gravelly guitar.

While I appreciated the experience of listening to a bunch of original songs written for and about a great story, musically Songs from District 12 and Beyond is too much of a thematic fishing expedition. Rather than standing as a cohesive work of art, it is better appreciated for its individual numbers about growing up amid evil and finding hope in one another.