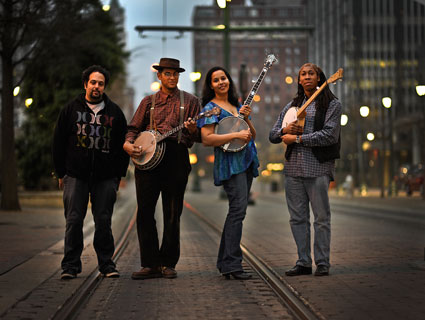 The Carolina Chocolate Drops third album, Leaving Eden, begins with a bang, a rousing fiddle tune (“Riro’s House”) whose driving beat promptly had me bobbing my head and squinching up my face and generally looking rather stupid. But I didn’t care. After a brief instrumental chillout—a sparse minor traditional called “Kerr’s Negro Jig”—it regains momentum with a percussive rendition of an old Cousin Emmy tune, “Ruby, Are You Mad At Your Man,” a fine platform for the soulful, classically trained Rhiannon Giddens to let loose a bit with her powerful pipes.

In case you’re not yet familiar with the Chocolate Drops, much of their repertoire harks back to a time early in the last century when there were quite a number of uncelebrated black string bands—including their namesake, the Tennessee Chocolate Drops—playing and composing this type of music. When I checked in with her a while back, Giddens talked a bit about being inspired by the TCD’s leading man, Howard Armstrong. Fiddler Joe Thompson, who died on February 20, at age 93, was a personal mentor for the band, according to the Drop’ official bio.

This is the Drops’ first album since losing the talented Justin Robinson, who has embarked on other projects. But they’ve have made up for Robinson’s departure with the addition of Hubby Jenkins, a black multi-instrumentalist and songwriter who shares his bandmates’ passion for reinterpreting traditional American music. As before, there’s so much instrument-swapping that it’s well nigh impossible to keep track of who’s doing what, when. Dom Flemons, Chocolate Drops’ quintessential showman, guitar ringer, and third banjoist, also stands out on the percussion, driving that “Riro’s House” beat and embellishing tunes with bones, quills, and jugs—which is always fun live. 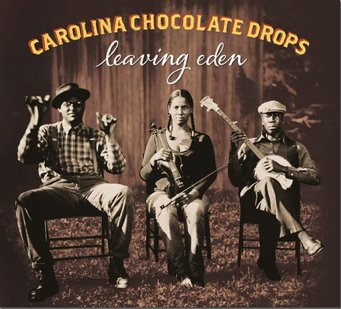 I was mildly surprised a while back to learn that the Drops’ were also picking up Adam Matta, who features prominently on several tracks. Matta is a human beatboxer who can do absolutely unbelievable things with nothing more than a microphone. It’s an interesting combo so long as it’s not overdone, and I think the Drops were pretty smart about it; in proper doses, Matta’s unique skills add a retro-modern spice to this mix. But you’re unlikely to catch Matta on the band’s current US tour, Giddens told me in a recent email. He’ll be playing selected dates, but he’s become more of a part-timer. But they will be bringing along cellist Leyla McCalla, who also plays on the album.

Leaving Eden continues the Drops’ M.O. of reviving old tunes, often with a black twist. You’ll find quite a variety here, from the backwoods-y vibe of Etta James’ “West End Blues” to an adaptation of “Mahalla,” a slack-key instrumental by South African spoon-slide player Hannes Coetzee, to Ben Curry’s goofy “Boodle-De-Bum-Bum” and “Run Mountain,” a traditional that Flemons sings in such a way as makes me want to go to the back door to see if the chickens have got out.

I’m also liking the traditional call-and-response* “Read ‘Em, John” and the swing-bluesy “No Man’s Mama” which has a just-divorced wife reveling in her independence. I found Giddens’ original tune “Country Girl” pretty but a tad earnest; she regained my attention and more on the sweet, mournful title track—a tearjerker whose lush instrumentation includes fine cello work by McCalla.

Bottom line: I dig this album at least as much as I did Genuine Negro Jig, the Drops’ last recording—which veteran music critic Greil Marcus told me was his favorite album of 2010. Did I mention that it also hit No. 1 on the bluegrass charts and won a Grammy to boot, for best traditional folk album. Nope, I don’t believe these guys are leaving Eden quite yet.

*CORRECTION: The original version of this review said Hubby Jenkins sang this number. It was Dom Flemons.