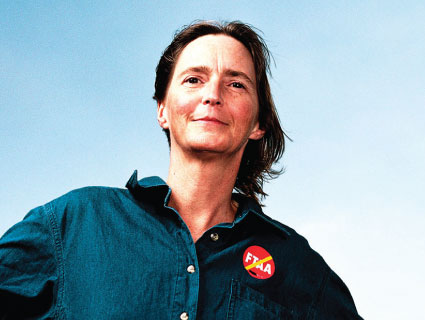 In her makeshift classroom in lower Manhattan, Lisa Fithian turns to a group of several dozen students, squares her shoulders, and issues a challenge: “Does someone want to be a cop and come get me?” A tall redhead abruptly breaks out and lunges at her, but Fithian, a petite, den-motherish 50-year-old, head fakes and bolts away. Cheers erupt from her pupils, Occupy Wall Street protesters intent on shutting down the New York Stock Exchange the following morning. Another pretend cop moves in, and this time she drops to the ground, flopping like a rag doll as the officer struggles to drag her away. Fithian stands to deliver her lesson. “Of the two choices, running away or going limp, what does running away communicate?” she asks.

She smiles and nods. “Guilt.”

When it comes to civil disobedience, there’s often a right and wrong way to break the law, and one of Fithian’s jobs is to teach the right way to hundreds of newly minted Occupy activists. Call her Professor Occupy. With somewhere between 80 and 100 arrests under her belt (she’s lost count) over nearly four decades of rabble-rousing, Fithian may be the nation’s best-known protest consultant. Unions and activist groups pay her $300 a day to run demonstrations and teach their members tactics for taking over the streets. But for much of the past six months Fithian has been dispensing free wisdom to the young radicals who took over parks from New York City to Los Angeles last fall, everything from proper tear gas attire to long-term protest strategies. “When there is some conflict, or things aren’t going the way that we want them to go, or people don’t have a good long-term plan,” says 27-year-old Jason Ahmadi, an early arrival at Zuccotti Park, “I have heard others and myself say, ‘Dammit, where is Lisa Fithian?'”

Fithian, who lives in Austin, Texas, but spends most of her time on the road, dresses like Mark Zuckerberg and swears like Tony Soprano. She grew up in Hawthorne, New York, a Big Apple bedroom community where she developed a reputation for trouble—police might knock on her door to inquire about, say, a suspicious fire in a neighbor’s front yard. In middle school, she once got busted for bringing a knife to class. But she was smart and earnest, and as a high school sophomore she founded The Free Thinker, an underground newspaper that tackled subjects like littering in the cafeteria. Her classmates voted her “Most likely to do things for the school.” They also voted her “Most likely to do things to the school.”

In 1983, after graduating from Skidmore College, Fithian spent a year following Abbie Hoffman, founder of the anti-war Youth International Party (a.k.a. the Yippies), tending his garden and “picking his brain.” Three years later, a coalition of activists outraged by the CIA’s covert wars in Central America hired her to organize a blockade of the agency’s Langley, Virginia, headquarters that ended with 600 arrests. She hit the streets with fellow protesters—including the black-clad anarchist kids she calls “the smashy smashies”—to disrupt the World Trade Organization’s 1999 meeting in Seattle. And in 2005, she teamed up with fellow radicals and former Black Panthers to launch Common Ground Relief, a group that rebuilt houses while clashing with police in the devastated Lower Ninth Ward of post-Katrina New Orleans. “When people ask me, ‘What do you do?’ I say, ‘I create crisis,'” Fithian told me. “Because crisis is the leading edge where change is possible.”

“When people ask me, ‘What do you do?’ I say, ‘I create crisis,'” Fithian says. “Because crisis is the leading edge where change is possible.”

Fithian’s résumé has made her a target for people hoping to discredit the nascent Occupy movement. In a single week this past October, conservative activist Andrew Breitbart ran nine stories on his website painting her as an anarchist bent on “the total annihilation of the American political and economic system.” In fact, Fithian has a long history working with mainstream groups such as the Service Employees International Union (SEIU). But Max Berger, an organizer of Occupy’s moderate wing who cut his teeth working for Howard Dean’s 2004 presidential campaign, sees her credibility with young radicals as crucial. “Nobody is going to say that what Lisa does is not badass,” he says, “so she is in a very strategically important position of teaching kids who want to be badass to be smart.”

Case in point: On September 17, the first day of Occupy Wall Street, police told the protesters they couldn’t affix their cardboard “Liberty Plaza” street signs to utility poles around Zuccotti Park. Many people wanted to give the cops the middle finger, but Fithian offered a compromise: They would take down the signs and find new ways to display them. The important thing, she stressed, was to keep occupying.

On Day Two of Occupy, Fithian left New York to coordinate anti-bank protests in multiple cities on behalf of a coalition of religious and community groups. The overlap of her consulting gig with the birth of the Occupy movement was sheer coincidence, but Fithian made the most of it. She shuttled around to the encampments popping up in cities like San Francisco, Los Angeles, and Chicago, schooling the fledglings in protest tactics and enlisting them to help her occupy banks or defend foreclosed homes. “It showed a lot of us how it is important to connect the larger message of inequality and corporate control of politics to more local issues,” says Kelvin Ho, an organizer with Occupy Chicago.

In late October, Fithian was called back to Manhattan to help the movement catch its stride. While Occupy Wall Street was succeeding beyond its organizers’ wildest dreams, its internal politics were a mess, and meetings of its quasi-governing body, the Spokes Council, often devolved into shouting matches. Fithian, an old pro in dealing with nonhierarchical groups, agreed to help facilitate. “We are not going to be making tons of decisions but streamlining our work, making this a more functional process,” she announced, kicking off a Spokes Council meeting a few days after police razed the protesters’ encampment in Zuccotti Park. As each of the committees known as “working groups” voiced their needs and concerns, Fithian took notes on a sheet of construction paper, but she stopped writing when Sage, a homeless occupier in fatigues, began rambling. When she tried to cut him short, Sage protested loudly about “a line between the haves and have-nots of language.” Fithian cut him off again, holding out her palms as though blocking a pit bull and offering a quick summation: “How about, ‘Respect for diversity of expression’?” With Sage appeased, the meeting could proceed. “I heard a ton of people mention afterwards, ‘Oh my God, I wish that we had a facilitator like that before,'” recalls Logan Price, a movement organizer. “She helped the Spokes Council get to the point where people felt comfortable about continuing it.”

A new problem arose in November when a spate of graffiti and window smashing at a march in Oakland, California, fueled notions that the movement’s tent cities were full of thugs. Some Occupy protesters supported the mayhem, citing the need for “diversity of tactics.” But Fithian countered in an open letter that “diversity of tactics becomes a code for ‘anything goes,’ and makes it impossible for our movements to hold anyone accountable for their actions.” Stephen Lerner, an SEIU executive board member who has worked with her for 18 years, believes Fithian’s widely read statement helped cement the movement’s nonviolent culture: “When she says it, I think it has a different kind of credibility because of her own history.”

As Occupy marches on, perhaps its greatest internal tension is between the reformers—pragmatists with concrete goals—and the revolutionaries.

Even criticism from Fithian’s peers is tempered with admiration. “She has a reputation for taking things over by accusing other people of taking things over,” one prominent occupier told me, but “I think she has stuck with it and is a smart person and has done great work building bridges.”

As Occupy marches on, perhaps its greatest internal tension is between the reformers—pragmatists with concrete goals—and the revolutionaries, idealists who feel that asking anything of a corrupt system only marginalizes the movement. “This isn’t a protest movement, because protest movements are to address issues that the power structure could conceivably be willing to give up,” a black-clad occupier named Max Bean told Fithian over lunch in early December. “We are asking to dissolve the power structure. And you can’t ask for that. You can’t protest for it. All you can do is grow until we are so big that we are everything.”

Fithian weighed her response carefully. “Movements build because people have some sense of hope and victory and accomplishment,” she replied, setting aside her plate of steamed kale. “We might win on the millionaires’ tax in the next six months. That’s gonna be fucking huge.” She smiled as Max gave her “twinkle fingers,” the Occupy hand signal for approval. “So it’s the balance between reforming and revolutionary things. And that’s why this movement is so beautiful, because it holds both.”

The SEIU sent Fithian to Washington three days later to coordinate Take Back the Capitol, an Occupy-style assault on corporate lobbyists. Bona fide occupiers were flown in to help union members blockade K Street and take over congressional offices—part of a labor strategy to forge alliances with Occupy—but some occupiers chafed at the union’s unwillingness to risk more than a few symbolic arrests. Fresh out of jail and gumming a wad of Copenhagen, Joe Carriveau of Occupy Milwaukee told me he was “done with this Democratic coalition crap. We are supposed to be down here for some radical action.”

The following day, in a tent on the Mall, Fithian helped run a session aimed at easing tension between the two factions. She let almost everyone else speak before taking the floor. “One of the problems is when people are doing different shit, we are starting to disrespect each other because we are thinking that your way is not as rad as our way,” Fithian said. “We are bringing in all these judgments, and it’s very destructive. We have to accept what each movement’s gifts are, and where we can be in alignment.”

Union members and occupiers can work together to “interrupt the space between corporate America and democracy,” she went on, to murmurs of assent. “It’s not about getting our elected officials to do something. Shit. They ain’t gonna do shit.”

She spoke faster and faster, running her words together, before stopping abruptly 90 seconds later. “Sorry, I talked a lot,” she said sheepishly. But no one seemed to mind. For once, the crowd abandoned its twinkle fingers for applause.