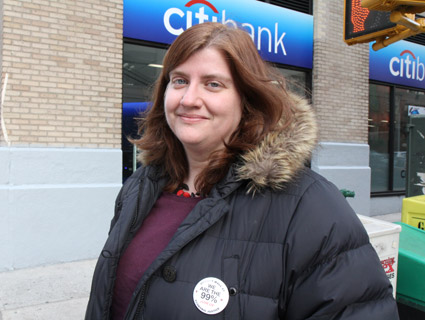 Cathy O'Neil, a participant in the Alternative Banking GroupJosh Harkinson

High up in a Manhattan conference room on Sunday, a group of investment gurus discussed Occupy Wall Street. Should they support a set of tough-sounding financial reforms just proposed on the campaign trail by presidential candidate Jon Huntsman? Or was it reasonable to demand even deeper reforms? “This isn’t enough,” argued Cathy O’Neil, a former hedge fund quant who organizes the group, a branch of Occupy Wall Street known as the Alternative Banking Group. She proposed that the gathering of financial experts come up with improvements to Huntsman’s plan and present them to Occupy Wall Street’s General Assembly. Another OWS supporter, whose day job involves consulting for private equity firms, looked up from his laptop and smiled. “That’s an excellent idea!”

As unlikely as it may have seemed when protesters first descended on New York’s financial center this fall, an increasing number of Wall Street insiders are now returning the favor, you might say, by occupying Occupy Wall Street. Sympathetic to the movement’s critiques of the banking system, they’ve been quietly lending their expertise to Occupy efforts to develop real ideas for revamping the industry.

“What I want is to influence the conversation,” says O’Neil, who worked for two years with Lawrence Summers, the former US treasury secretary, at the hedge fund D.E. Shaw.* “It’s about education and outreach and just the message that the financial system is too complicated—that you are not dreaming this.”

Founded in early October by former British diplomat Carne Ross, the 60-person Alternative Banking Group has become a repository for OWS-friendly financial insiders. It includes current and former investment bankers, traders, and lawyers for the securities industry, but also many laymen—including housewives, people who used to sleep in Zuccotti Park, and guys with piercings who wear Che Guevara T-shirts. The group shares Occupy Wall Street’s website, its nonhierarchical structure, and its distaste for partisan politics. “I’d say the one thing that everybody agrees on is that the system isn’t working,” O’Neil says. “And there is nothing about being a Republican or a Democrat in that statement.”

The Alternative Banking Group’s meetings can get contentious. At the confab on Sunday, which took place at Columbia University, members squared off over the NEED Act, a bill by Congressman Dennis Kucinich that would put the Federal Reserve under the control of the Treasury Department and allow it to print money without issuing new debt. The bill could be “a third way that I think would satisfy libertarians as well as people on the left,” said Jamal Mahmood, an independent retirement planner. A group of white-haired Kucinich fans were onboard, but a Harvard-educated high-frequency trader worried that the plan “would turn America into Greece, basically.”

O’Neil sees the group’s diverse views as one of its biggest strengths. “It keeps us from making our own little universe of assumptions, which was one of the causes of the crisis to begin with,” she says.

She began to think of it more as a cynical exercise in outsmarting “stupid people”—getting in front of the herd and then selling back to them.

While attending college at the University of California-Berkeley in the early 1990s, O’Neil never considered herself political. After studying number theory at Harvard and completing a mathematics post-doc at MIT, she joined D.E. Shaw in 2007, where her job was to use mathematical reasoning and statistical modeling to predict movements in the market. Three months into her job, the stock market dipped, a hedge fund failed, and her firm lost a ton of money. She started to question many of the assumptions underpinning her work.

About a year later, with the markets in turmoil, O’Neil was eating lunch with a group of five fellow quants who began discussing the possibility of a sovereign debt crisis of the sort now roiling Europe. She and one other friend at the lunch were in the minority in seeing even a remote chance of it happening. “At the time, quants felt like the system was as solid as any religion,” she says of their devotion to technical market trading. O’Neil’s bosses liked to describe their work as a public service—a way to make sure that investors’ money was spent in the best way possible. But she began to think of it more as a cynical exercise in outsmarting “stupid people”—getting in front of the herd and then selling back to them. “I never heard anybody say, ‘I am going to invest in this because it is a good idea,'” she recalls. She felt like on some level she was part of the same herd that she was supposed to be hunting.

In May 2009 she quit and went to work for Risk Metrics, a risk management consultancy for banks and hedge funds, where she hoped to use her skills more constructively, perhaps to help keep the financial system from running off another cliff. Pretty soon she was in charge of evaluating credit default swap models, but she felt that most firms that hired her to run their numbers didn’t listen to her warnings. “They just don’t care,” she says. “They want the rubber stamp. And it just ultimately made me realize that this isn’t where I want to be.”

By this summer, O’Neil was working at an internet advertising company in SoHo when she heard about Occupy Wall Street. She was inspired that regular people desperately wanted to reform the financial system. But she was also perturbed by some things that she read, such as a newspaper quote from an occupier who wanted to ban short selling, the practice of betting that a company’s stock will lose value. “If there’s anything about the financial system that you should take a stand on, it’s not that,” she thought to herself. Her next thought was, “What am I going to do about it?”

In the following weeks, O’Neil began visiting Zuccotti Park with the idea of holding a teach-in about the financial industry. But the park was noisy and crowded and she was too nervous at first to announce herself on the people’s mic. Eventually she discovered the Alternative Banking Group, which had a presence in Zuccotti and had already begun to attract other students of finance, some of them quite radical.

“Like most people in Occupy Wall Street, I am concerned by rising inequality and the sense that society is fragmented and government has essentially been co-opted,” says Ross, the Alternative Banking Group founder. Ross, who resigned in 2004 from the British government in protest over the invasion of Iraq, hosts Alternative Banking Group meetings at the Manhattan office of his nonprofit diplomatic consultancy, Independent Diplomats. “I don’t believe in referring to government to solve these problems; that is a waste of energy,” he says. “Instead I believe in building new systems that are better.”

“Volcker came out with something really simple; now in the regulation process it is being unbelievably twisted.”

With O’Neil on board, the group decided to split into subgroups, with Ross focusing on designing an entirely new banking system and O’Neil facilitating separate discussions of incremental reforms. Their work has already begun to pay off. Last week, the Financial Times published a letter from Ross’ subgroup to the General Assembly describing its vision for an alternative bank and has asked the group to pen a guest column for its blog, Alphaville. O’Neil’s subgroup is designing a web and smartphone app that locates credit unions, talking about hosting its own conference on financial reform, and working on an online forum which will answer people’s questions about the financial system.

The Alternative Banking Group has also grown to include Occupy the SEC, another collaboration between activists and financial insiders that is trying to strengthen the Volcker rule, the anti-speculation banking measure that the Securities and Exchange Commission will implement next year. “Volcker came out with something really simple; in the legislative process it got watered down, and now in the regulation process it is being unbelievably twisted,” said a middle-aged financial risk analyst who briefed the Alternative Banking Group about the Volcker rule on Sunday. (He asked that I not use his name because he still works in the banking industry.) He’d been meeting with Occupy the SEC twice a week for several hours to prepare hundreds of comments on the rule for the SEC—in a direct challenge to banking lobbyists.

The problem, as the risk analyst explained it, is that regular people don’t have the time or temerity to wrestle with $800-an-hour lawyers about the ins and outs of implementing arcane financial rules. “The law gets passed and normally people walk away,” he said. But, he added, Occupy the SEC wants to keep them engaged and shame the SEC into listening to them: “We say, look, this is just a bunch of people who are interested and want to participate.”

“That’s what OWS is all about, baby,” O’Neil interjected. The analyst laughed as O’Neil wiggled her fingers. “I’m twinkling this!” she explained, though no explanation was necessary—everyone there already understood the Occupy hand signal for enthusiastic agreement.

Correction: An earlier version of this article incorrectly stated that Lawrence Summers was currently the US treasury secretary.