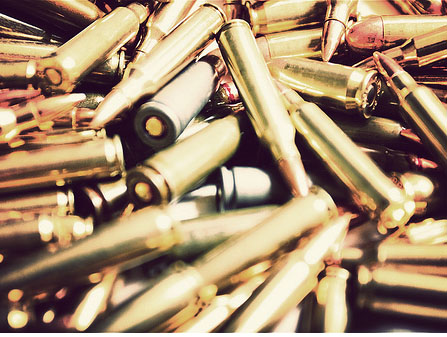 On Tuesday, 100 environmental groups petitioned the Environmental Protection Agency to regulate lead in bullets and shot, adding fuel to the conspiracy theories of Second-Amendment fans that environmentalists—and the Obama administration—are about to take away their ammo.

The groups, led by the Center for Biological Diversity, has asked the EPA to ban lead ammunition and require sportsmen to use nontoxic bullets and shot. Hunters leave 3,000 tons of lead bullets in the woods each year, and shooting ranges generate another 80,000 tons of spent ammo, CBD says. As many as 20 million eagles, condors, swans and other birds die each year due to lead poisoning after consuming what’s left behind. The groups argue that the EPA should ban lead ammunition under the Toxic Substances Control Act (TSCA), the 1976 law governing what chemicals the EPA is allowed to regulate.

The Fish and Wildlife Service outlawed lead bullets for hunting waterfowl back in 1991, a decision the agency has declared a “remarkable success, preventing the premature deaths of millions of waterfowl.” Lead poisoning makes the birds lethargic, weak, emaciated and unable to fly, and damages the birds’ gallbladders, livers, kidneys, and spleens. And wildlife biologists for the National Park Service note, “lead poisoning is the biggest threat facing the successful recovery of the California condor,” and it is hazardous to other types of birds as well. (NPS also points to studies showing that lead bullets aren’t good for people who consume wild game, either.) But most sportsmen still use lead bullets for hunting other birds and mammals.

CBD and other groups filed a similar petition in August 2010, but the EPA declined to weigh in on ammo. The groups then sued to try to get the EPA to regulate lead in bullets, but the lawsuit was dismissed last September. Now they’re asking the EPA to reconsider, which I’m sure the Obama administration would love to do in the middle of an election year.

The previous petition sparked one of the many conspiracy theories about the EPA, and the National Rifle Association proceeded to freak out about how the Obama administration was going use this as another “vehicle to implement gun control.”

In response to the latest petition, the National Shooting Sports Foundation is asking Congress to pass the Sportsmen’s Heritage Act of 2012, a law that would amend TSCA to state that the ammunition is explicitly excluded from regulation. The group’s senior vice president and general counsel, Lawrence G. Keane, put out a heated statement on Tuesday arguing that “hunters and their ammunition have done more for wildlife than the CBD ever will.”