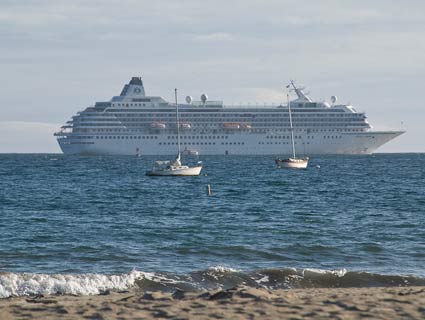 Great news, Golden State: Federal regulators have ruled that, starting next month, no more sewage shall be dumped on your coasts. Or at least not without consequence. Yesterday, the Environmental Protection Agency designated California’s 1,624-mile coastline (stretching from Mexico to Oregon) a federal no-discharge zone, banning large vessels like cruise (PDF) and cargo ships from unloading sewage and other types of pollution into the state’s coastal waters. (Of course, oil leaks and spills and their aftereffects will continue to be a problem.)

“California’s coastal waters will no longer serve as a sewage pond for big ships,” said state EPA Secretary Matthew Rodriguez in an agency press release. “For too long, pollution from these vessels has endangered our marine environment, jeopardized public health, and threatened the coastal communities that rely on recreation and tourism dollars.” The EPA estimates that the no-discharge zone will prohibit more than 22 million of the 25 million gallons of treated sewage dumped by vessels in California waters each year. A small boater flushing untreated sewage into the water produces as much bacterial pollution as that of treated sewage produced by 10,000 people, according to a 2003 study by the San Francisco Bay Conservation and Development Commission. The marine conservation group Oceana estimates (PDF) that an average cruise ship generates 30,000 gallons of human waste every day. Untreated sewage, chemical, and oil runoff from marine vessels can contaminate water with toxins, coliform bacteria (the family of bacteria that includes E. coli), and invasive species, all of which can disrupt marine ecosystems.

The new sewage ban, which creates the nation’s largest no-discharge zone to date, will apply to some 2,000 cargo ships that traverse the state’s ports each year. It could also effect the nearly 77 percent of Californians who live on or near the coast, as well as marine and other wildlife. The state coastline is home to four national marine sanctuaries, portions of six national parks and recreation areas, and more than 200 other marine reserves and protected areas, according to the EPA.

Yesterday’s designation is particularly important, the EPA says, because it addresses an area far more expansive than those of existing no-discharge zones established under the Clean Water Act. The new zone encompasses the entire California coastline plus the waters extending three miles from it, including bays and estuaries subject to tidal influence. In addition, the fact that the ban is imposed federally means that the US Coast Guard will be responsible for implementing it, along with state patrols and the National Oceanic and Atmospheric Administration, which in California implements similar sewage discharge bans in four marine sanctuaries.

It’s too early to tell how effectively the new rule can and will be enforced, particularly given the vast size of the new no-discharge zone and the patchwork of federal and state enforcement agencies sharing oversight in this area. Policing no-discharge zones have proven to be challenging in the past. A 2004 Government Accountability Office report (PDF) found that state patrolling was weak and ineffective, while the Coast Guard patrolled only 3 out of 23 federal no-discharge zones at the time.

The report also found that data was sporadic. In Michigan, for example, where all of the state’s waterways were designated no-discharge zones in 1976, the report found that the number of sewage pump-out stations—where ships can unload sewage for treatment or disposal on land—remained the same in 2004. New data on the stations hadn’t been collected since the mid-’90s. The GAO also identified that there was no effective way to punish sewage discharge violators, made more difficult by the fact that boat discharge is hard to distinguish from other pollution, such as municipal sewage plant overflows and other kinds of run-off. All are important cautionary tales for California. 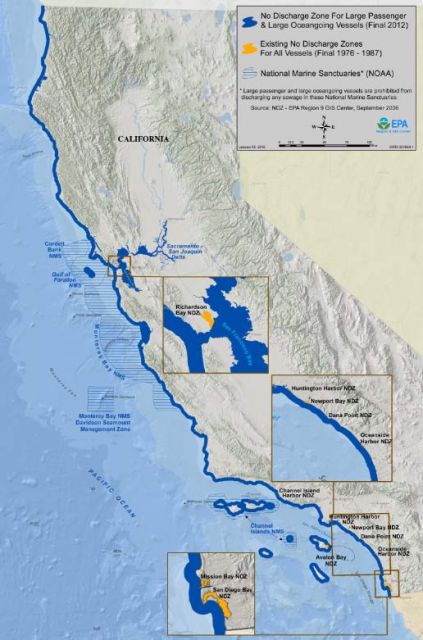