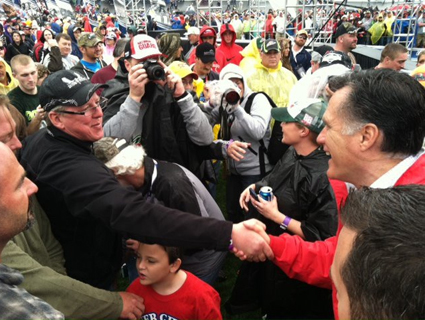 On Thursday, Mitt Romney’s presidential campaign released a new list of Louisiana endorsers, ahead of the state’s Saturday primary. Among the supporters? State Rep. Tim Burns of Mandeville, who, in 2008, justified his support for a slate of immigration bills by suggesting that undocumented immigrants had made Walmart unsafe for women:

They’re frustrated by the inability to go to Walmart at night, they’re scared to go to Walmart at night…You weren’t sure you were in this country. Not trying to profile people, but it just seemed like people were concerned, that they were…ah…I’m not trying to say any people there were being rude, or disrespectful or anything, but I could see how somebody, a housewife, could be intimidated to go there.

Walmart actually has pretty tight security, but Burns’ point was that a certain group of people were by definition both suspicious and intimidating. It’s positions and statements like these that help explain why Latinos are fleeing the Republican primary; just 14 percent of Latino voters say they would support Romney against President Obama in November.

Burns is also an avid opponent of abortion, to the extent that, in 2006, he sponsored a bill that would make the procedure punishable by one year in prison and/or a $10,000 fine. He made exceptions for rape and incest—sort of. Rape victims would need to prove within five days of the rape that they had not been pregnant prior to the crime; the rape must be reported to the police within seven days; and the abortion must be reported within 13 days. In cases of incest, victims would be required to file a police report prior to receiving an abortion (a move that would be severely complicated by the fact that the state also requires parental consent). State Rep. Joe Harrison, whose endorsement was also trumpeted by the Romney campaign on Thursday, introduced a 2011 bill that “would make it a crime to transport or shelter an illegal immigrant, or to help them stay here in the US”—similar to the law that was eventually passed in Alabama.

These aren’t Mitt Romney’s views in full and he doesn’t have to agree with everything an endorser says. But campaigns, especially those as image-conscious as Team Romney, take the endorsement process very seriously, and they generally vet the politicians and leaders whose support they wish to cite. And Lousiana’s not an isolated example: Romney has brought Kansas Attorney General Kris Kobach—who helped lawmakers in Alabama and Arizona craft their harsh immigration laws—into the fold as an unpaid adviser, and tepidly embraced fetal personhood when speaking to Christian groups.

Ultimately, all of this underscores a larger issue facing his campaign. Romney has gone out of his way to convince conservative activists that he’s just like them. The problem is when everyone else starts believing him.