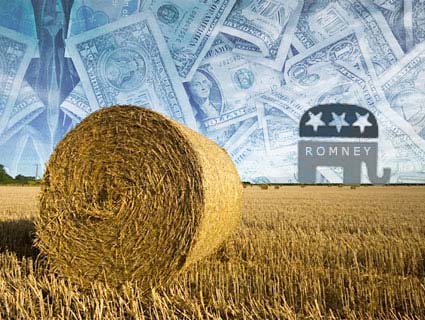 For the casual observer like me, it’s hard to make sense of the GOP presidential primary, what with all the crazy talk and the recurrent Santorum surges. But people who follow these things closely tell me that despite the chaos, Mitt Romney will likely emerge as the nominee.

That means it’s time to start contemplating what a hypothetical President Romney might get up to on food and agriculture issues. The embattled Republican front-runner hasn’t expressed his views on ag policy. But just last week, Romney telegraphed his food-and-ag agenda by announcing his Agriculture Advisory Committee.

• Randy Russell, president, the Russell Group. This was a bold move by Romney—Russell is a high-powered D.C. lobbyist whose firm boasts clients that rank among the biggest names in industrial food and agriculture. According to the Center for Responsive Politics, the Russell group reaped more than $4 million in lobbying income in 2011. Top clients included Cargill, Monsanto, JBS (the globe’s largest meat company),  PepsiCo, Yum! Brands (owner of Taco Bell, KFC, and Pizza Hut), Kraft, Altria, Hormel, Land O’ Lakes, and the National Pork Producers Council.

Russell has made a career of dashing through the revolving door that separates agribusiness from the government agencies that regulate it (bio here)—he went from serving as Farm Bill coordinator for Reagan’s USDA in 1981 to heading up government relations for Pillsbury in 1982;  after that, he headed back to Reagan’s USDA in 1984—and promptly launched his lobbying career in 1986. Got all that?

On its website, the Russell Group takes credit for ramming Monsanto’s hotly contested Roundup Ready alfalfa crop through the USDA approval process in 2011.

• Bill Even, North American Biotech Affairs and Industry Relations Leader at Dupont’s Pioneer Hi-Bred International. Curiously, the above-linked Romney campaign press release omitted Even’s current job in its description of him, listing him as co-owner of Even Family Farms and  South Dakota’s former Secretary of Agriculture. But Even departed his state ag secretary job in 2010 precisely to join Dupont’s high-tech seed division. According to a 2011 report from ETC Group, Dupont is the globe’s second-biggest seed company (trailing only Monsanto) and the sixth-largest seller of pesticides.

• Chuck Conner, President and CEO, National Council of Farmer Cooperatives (2009-present) and former deputy secretary, USDA (2005-2008). Again, the Romney press release has omitted the juiciest bit on on Conner’s résumé: from 1997 to 2001, Conner was president of the Corn Refiners Association, which represents the corn-ethanol and high-fructose corn syrup industries and the heavyweight corporations that dominate them, including Archer Daniels Midland and Cargill.

• Senator Mike Johanns, US Senator from Nebraska (2009-present). Johanns served as Bush’s secretary of agriculture (and Chuck Conner’s boss) from 2005 to 2007. He stepped down to successfully run for the Senate, and promptly became a magnet for agribusiness cash, drawing in a cool $522,000 from the industry since he first ran, the Center for Responsive Politics shows. He has not been shy about promoting their interests. In a 2011 letter to the House and Senate ag committee chairs, Johanns calls for hearings to investigate some of the very few progressive initiatives in the Obama administration’s farm policy, iincluding attempts to rein in the power of the meat industry, reduce pollution from factory livestock programs, and devote a tiny portion of the USDA’s budget to promote local and regional food production.

By assembling a team that includes an exec from one of the globe’s largest agribiz firms, a powerful industry lobbyist, and a former corn-industry flack, Romney’s message is as subtle a giant combine roaring through a corn field: support my candidacy, and I’ll tend to your (agri)business.