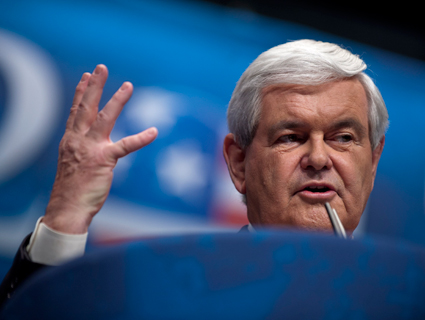 Newt Gingrich’s appetite for reading is notorious. He’s a speed-reader, and friends and aides like to tell stories about Gingrich walking around in circles, moving his fingers across the pages of some massive history book. So it was only natural that, when his political talents were no longer in high demand in Washington, the former speaker reinvented himself as an Amazon.com reviewer. Between 2005 and 2008, Gingrich penned 156 reviews—all positive—at the online retailer, on subjects ranging from Civil War novels to science fiction and longform journalism. Here’s one I’ve selected totallly at random, which will doubt endear him to the GOP’s social conservative base:

Dave Freedman’s Natural Selection is just plain fun. It is pop-Darwinism carried to its ultimate extreme, but it stresses your mind, gets you to wonder about the species that could be in the ocean deep and reminds you that things aren’t always the way they seem. While this book is fantasy rather than science, it brings just enough science and high technology in to make you pay constant attention. The intelligence of the dangerous new species makes this a cross between Jaws and Michael Crichton’s description of intelligent nano-biology. I recommend it for pure fun and for getting you to think a little differently about the possibilities on our planet.

Gingrich, whose weakness for adverbs is a matter of public record, adopted a new set of rhetorica; tics in his reviews. As Dave Weigel noted: