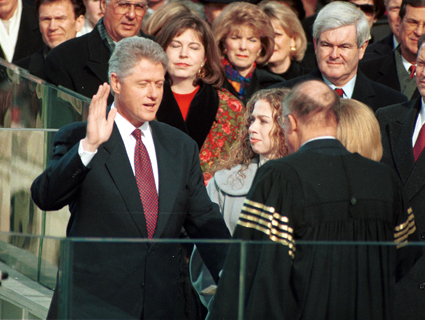 One of Newt Gingrich’s most compelling arguments on the campaign trail is that as president, he’ll be able to win converts to his policies through sheer intellectual force and powers of persuasion. Put him in a one-on-one debate with Barack Obama and he’ll wipe the floor with the president. Let him deal with Congress and he’ll find a way to break through. Newt’s been in the trenches with Bill Clinton, the thinking goes, and has the legislative victories to show for it. But as Robert Draper reported for GQ in 2005, Gingrich’s negotiating skills often left his conservative colleagues shaking their heads:

The Clintons are never far from Newt’s mind. They’re like the Kennedys were to Nixon: glamorous, charismatic, brazen power-grabbing elitist amoral lying dream killers. Wrong on health care, wrong on the budget, wrong on the military…and so goddamned clever! Newt’s staff and the class of ’94 had seen it time and again: Every time Speaker Gingrich galloped into the Oval Office with his musket loaded for Slick Willie, he shuffled out holding his own gonads. “It got to the point where the Republican freshmen were afraid to send him in there alone,” remembers Newt’s archivist and friend, Mel Steely. “By the time Newt would get back to his office, Clinton’s press secretary had already announced the opposite of what they’d agreed on. I’d say, ‘Newt, how did you get suckered in?’ And he’d say, ‘Clinton would come up from behind his desk, put his arm around me, and say, “Newt, you’re absolutely right.” Just charm the pants right off of you.'”