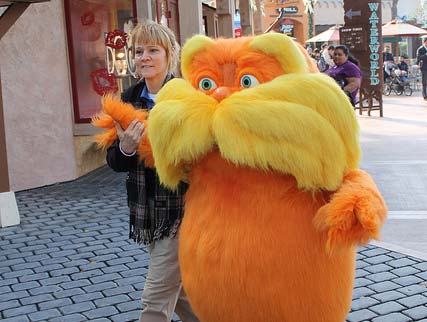 The internet was aflurry last week after Mazda launched new advertisements for its crossover SUV featuring the endorsement of The Lorax. Many balked at the idea that the much-loved Dr. Seuss book that debuts on the big screen on March 2 would be used to sell cars. But today it gets even worse: Apparently, Mazda is now deploying people in Lorax costumes to schools to get kids to convince their parents to test-drive the new car.

The sales pitch is part of the National Education Association’s “Read Across America tour — Driven by Mazda,” which arrived at Alexandria’s James K. Polk Elementary School on Tuesday.

It was a hybrid event: a celebration of reading, a fundraiser for public-school libraries, and an opportunity to market Mazdas to the pint-size set. While they don’t buy many cars themselves, they have direct access to parents who do.

According to the National Education Association’s website, Mazda and Universal Pictures are teaming up to raise up to $1 million for public school libraries. The catch, though, is that public school libraries will get $25 for every test-drive of a Mazda vehicle between Feb. 21 and April 2, 2012. So, in order to get the money, schools will need to get parents to go test-drive the cars—hence the need to enlist a fleet of mini-marketers.