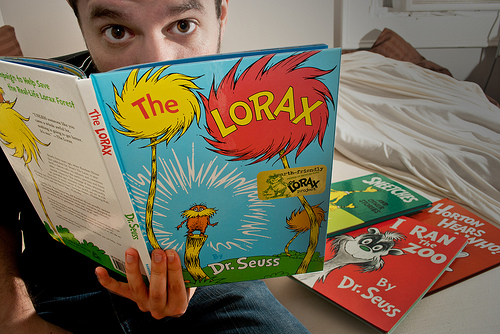 If you read this blog regularly, it’s likely that you were a fan of The Lorax, Dr. Seuss’ cherished 1971 classic. It’s a story about a little orange guy devoted to protecting the Truffula trees, but it speaks more broadly to the threat that industry poses to the natural world. Now The Lorax has gone Hollywood, with a new film version from Universal Pictures due out on March 2. And it appears that fans of Seuss’ environmental message aren’t very excited about the release.

The trailer for the film prompted the students of Ted Wells’ 4th grade class at the Park School in Brookline, Mass. to start a petition asking Universal to revive the tree-hugging themes of the book. Over at Change.org, they’re requesting that the company at least add more educational materials to the film’s website and promotional materials. Wells notes that his students thought the trailer made the movie look “more like an adventure and romance, like it had totally lost its message about helping the planet.”

“Currently, the movie website, trailer, and story summary have no mention of helping our planet!” says the students’ petition. “This is a missed opportunity. There are big problems in our natural world and we need more and more people helping out.”

They have collected more than 50,000 signatures since they launched the petition in December. Here’s the trailer, which makes me think the kids are right on:

While we’re on the subject, The Onion was dead on about Hollywood’s attempts to remake Seuss well before this latest misadventure.