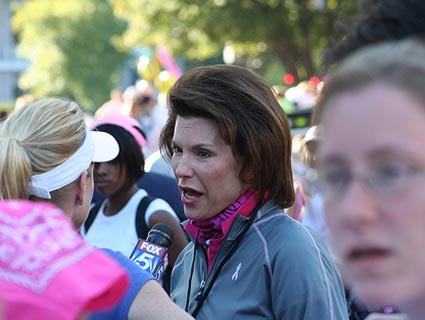 Breast cancer foundation Susan G. Komen for the Cure has reversed its decision to stop funding cancer screening referrals by Planned Parenthood, according to a letter from founder Nancy Brinker first obtained by Tom Benning at the Dallas Morning News and posted on the organization’s website.

The letter reads in part:

Our original desire was to fulfill our fiduciary duty to our donors by not funding grant applications made by organizations under investigation. We will amend the criteria to make clear that disqualifying investigations must be criminal and conclusive in nature and not political. That is what is right and fair.

Our only goal for our granting process is to support women and families in the fight against breast cancer. Amending our criteria will ensure that politics has no place in our grant process. We will continue to fund existing grants, including those of Planned Parenthood, and preserve their eligibility to apply for future grants, while maintaining the ability of our affiliates to make funding decisions that meet the needs of their communities.

It’s not entirely clear what this means. Since their initial announcement on Tuesday, Komen representatives have offered an avalanche of shifting explanations for their decision to stop funding Planned Parenthood. Those justifications have ranged from a new policy forbidding funding any organization if it or one of its affiliates was under any kind of government investigation to arguing that the problem was that some Planned Parenthood affiliates offered referrals instead of mammograms. But other organizations that received grants from Komen (such as Penn State) were not held to the same standard regarding investigations, and the probe of Planned Parenthood, initiated by an anti-abortion Republican congressman, was seen by critics as political witch hunt. There are problems with the referral argument, too. As my colleague Kate Sheppard wrote on Thursday, criticism of Planned Parenthood over not performing mammograms was something of a “red herring,” because “If you have health insurance and a primary care physician or gynecologist, that is generally the person who will refer you for additional care if they find reason for concern after an initial screening. But if a woman doesn’t have insurance or a regular doctor, clinics like Planned Parenthood are her point of entry.”

Given what Komen officials have said about their new standards requiring direct services, Friday’s letter leaves one big question—whether Planned Parenthood meets Komen’s criteria for future grants—still unresolved. Komen has not responded to journalists’ requests for clarification, telling the Washington Post‘s Ezra Klein that its statement “speaks for itself.”

Throughout the backlash, Komen’s leadership insisted its decision to cut off funding to Planned Parenthood was not political. Although Brinker herself is a former Bush administration official and has given thousands of dollars to Republicans over the years, Komen has not been widely seen as a partisan organization. But Karen Handel, Komen’s senior vice president for public policy, is a former Republican secretary of state from Georgia who is avowedly anti-abortion. A report from Jeffrey Goldberg at The Atlantic suggested the Planned Parenthood decision had been “driven” by Handel, and the new standards were a mere pretext for eliminating Komen’s funding for Planned Parenthood. (No retraction or correction has been made, and Goldberg says he stands by his reporting.) On Friday morning, Goldberg posted internal memos from Komen instructing employees on how to properly spin the decision.

The outcry seems to have helped fundraising at both organizations. On Thursday, both Komen and Planned Parenthood announced large donations, with New York City Mayor Michael Bloomberg pledging $250,000 to Planned Parenthood and Brinker saying that contributions to Komen were up “one hundred percent.”

UPDATE: A Komen board member tells the Washington Post‘s Greg Sargent that “It would be unfair to expect the group to commit to future grants.”

In recent weeks, the treasured relationship between the Susan G. Komen for the Cure Foundation and Planned Parenthood has been challenged, and we are now heartened that we can continue to work in partnership toward our shared commitment to breast health for the most underserved women. We are enormously grateful that the Komen Foundation has clarified its grantmaking criteria, and we look forward to continuing our partnership with Komen partners, leaders and volunteers. What these past few days have demonstrated is the deep resolve all Americans share in the fight against cancer, and we honor those who are at the helm of this battle.

The crucial question remains whether or not that partnership actually exists after today, or whether this is just a more amicable divorce.