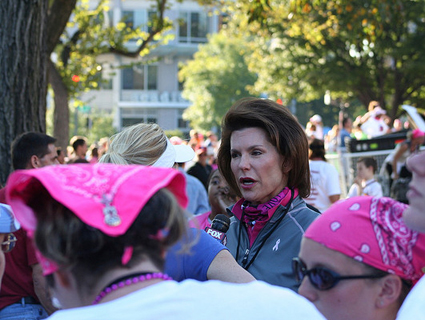 Nancy Brinker, the CEO of Susan G. Komen for the Cure, appeared on MSNBC on Thursday afternoon to deny that Komen’s decision to end grants to Planned Parenthood had anything to do with politics.

“I’m troubled that it’s been labeled as political,” Brinker told host Andrea Mitchell. “This is not a political decision.”

In the appearance, Brinker gave a revised set of reasons for why they are stopping the grants for breast cancer screenings. Komen initially claimed that it was ending the grant because a congressional investigation of Planned Parenthood launched by an anti-abortion lawmaker triggered a new internal rule against funding any program that is under investigation by federal, state, or local government. Now Brinker says the decision was less about the investigation and more about Komen’s revised grant standards.

“Our issue is grant excellence. They do pass-through grants with their screening grants, they send people to other facilities,” Brinker said. “We want to do more direct service grants.” She made a similar claim in a call with reporters later on Wednesday, arguing that the grants have been terminated because Planned Parenthood doesn’t generally provide mammograms directly.

Meanwhile, Brinker’s criticism of Planned Parenthood for acting as a referrer to other service providers is a bit of a red herring. It is true that women who come to Planned Parenthood for an initial screening may have to go elsewhere for additional care. But that’s true for any woman who needs additional attention from a specialist for a mammogram, biopsy, or lumpectomy. It’s often a health care provider like Planned Parenthood that detects cause for concern in the first place, which is why the National Cancer Institute states that screenings conducted by a health care provider “on a regular basis are the most effective ways to detect breast cancer early.” If you have health insurance and a primary care physician or gynecologist, that is generally the person who will refer you for additional care if they find reason for concern after an initial screening. But if a woman doesn’t have insurance or a regular doctor, clinics like Planned Parenthood are her point of entry. Just walking into a radiography clinic and asking for a mammogram usually isn’t possible, and if it were, it would be both extremely expensive and ill-advised.