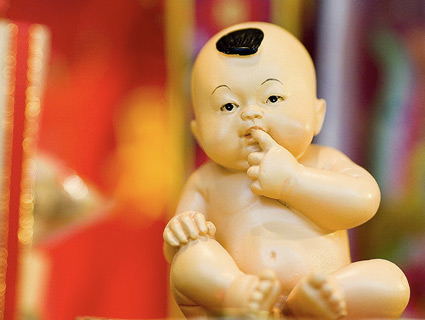 There are plenty of risks that come with opting for a Cesarean section: There’s always the chance of postpartum infection. There’s a possible link between elective C-sections and higher infant mortality. The operation is often performed too early. And the scarring isn’t exactly a plus.

But according to a recent study, the concern of “your kid will end up a fattie if you don’t suck it up and give birth the way God intended…” can be crossed off the list.

Reuters Health has the story:

Kids born by Cesarean section are no more likely to become obese than if they are born vaginally, a new study concludes…For the new research, [scientists] used data on three groups of several thousand people born in Southern Brazil in 1982, 1993 or 2004…The new research is of particular interest in Brazil, because in 2009 more than half of the babies there were born by C-section. In the U.S., the number has been on the rise for years and is now over 30 percent.

The research does rightly address a controversial Brazilian study published last May that suggested a correlation between C-sections and fatter children. (The working theory was that lack of exposure to bacteria from the birth canal could increase the chances of chunky brood.)

What was fishy about those findings? Like countless other scientific studies with lofty claims, the researchers forgot to account for…the staggeringly obvious:

“We thought from the beginning that probably what happened with the previous study is that they didn’t adjust for all of the confounders,” Fernando Barros, a professor and scientist at the Catholic University of Pelotas in Brazil, told Reuters. “If a mother gives birth by C-section, she’s different than a mother who has a vaginal birth.”

The new study from southern Brazil, published in the latest issue of The American Journal of Clinical Nutrition, did find that the children born by C-section had obesity rates between nine and sixteen percent, noticeably higher than the seven to ten percent among those born via the birth canal. But the disparity was erased after the scientists factored in data such as birth weight, the mother’s weight, smoking habits, and household incomes.

“The most simple explanation would be that more obese women require more Cesarean sections than lean women…and it’s really not the C-section itself,” Dr. David Ludwig, director of the Optimal Weight for Life Clinic at Children’s Hospital Boston, said in response to the new findings.

Boom. There you have it: From now on, do the rational thing and just blame your best friends for your outrageous poundage.