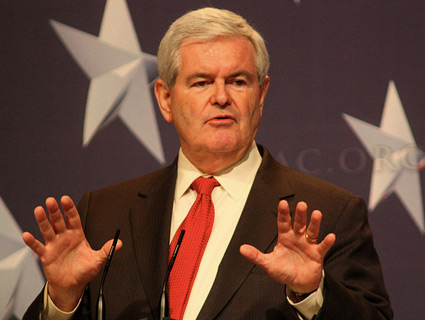 During Sunday morning’s NBC News/Facebook debate in Concord, New Hampshire, former Republican front-runner Newt Gingrich picked a fight with a familiar boogeyman—the Environmental Protection Agency. The fact that the EPA is a prime target for the 2012 GOP field is no real surprise, but Gingrich has zeroed in on a particularly obscure subject: The EPA’s “dust regulation.”

Gingrich scored some laughs from the audience on Sunday by knocking the inanities of the EPA’s effort to regulate dust. It is “an absurdity” that a government agency should be so uptight about dust in Iowa, the former House speaker said, as he explained how the regulation would hurt the families and workers of the Hawkeye State.

This issue has been in Gingrich’s sights for some time. In Atlantic, Iowa before the state’s caucuses last week, he slammed the EPA as a “job-killing dictatorial bureaucracy” and invoked the name of one of Iowa’s top Republicans to make his case against the big-government War on Dust:

Many of you have probably followed Sen. [Chuck] Grassley’s fight for the dust regulations…The EPA technically has the ability to regulate ‘particulate matter,’ as part of the Clean Air Bill, which I don’t think any congressman thought of as ‘dust.’ But of course it’s now interpreted to include dust. If you were to plow on a windy day, and some of the dirt was carried by the wind into your neighbor’s field, you would be polluting your neighbor’s field with your dirt. Now, since your neighbor’s field is exactly the same geologic dirt as your field, it’s implausible that you would actually be hurting it.

At least he’s been consistent on this. Too bad what was wrong then is still wrong now. The heart of the EPA-is-out-to-micromanage-America’s-dust hysteria is based almost entirely on a poor interpretation of language and law. The Des Moines Register did their share of debunking on the matter, and my colleague Tim Murphy did the same:

[T]he EPA does not regulate dust as we might think of it, at least not the kind of dust you’d laugh at if a candidate brought it up in a speech. Instead, they go after “particulate matter,” which, although it just sounds like a euphemism for dust, is actually a euphemism for “things that will produce uneconomic health and environmental effects if you breathe too much of them.” Soot would be the best example (and incidentally, something the EPA has been pretty lax about), or coal dust. Contra Gingrich’s assertion that the agency had taken the initiative to looking into regulating dirt, the EPA was required by law to review its standards on particulate matter to make sure that it was keeping up with the science. That was interpreted by the agriculture industry as a sign that new regulations were imminent, but EPA chief Lisa Jackson told Congress she had “no plans” to regulate dust, and, sure enough, no new regulations were issued.

For Gingrich, denouncing the EPA’s alleged jihad on dust and dirt might be an easy applause line, like, say, threatening to purge federal courts. But that’s really all it is.