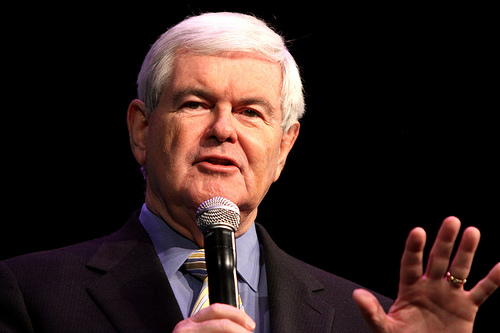 With a fresh set of super-PAC attack ads heading his way, Newt Gingrich rolled into the town of Newport midday on Friday. His destination: the Sturm, Ruger & Co. arms factory here, the largest employer in the county and one of the largest arms manufacturers in America. The factory was everything you’d imagine it to be—rifles and pistols and trade mags, oh my!—and more. (Including the mounted animal heads all over the walls.)

Gingrich, who bills himself as the true conservative’s pick for the GOP presidential nomination, looked typically at ease as he strode into the factory. Then came this exchange [emphasis mine]:

Reporter: Speaker Gingrich, given where we are today, do you own any guns personally?

Reporter: When was the last time you went shooting?

Gingrich: It’s been a couple years. I can tell you that my grandson just got his .410 for Christmas. Very exciting.

Reporter: Have you ever owned a gun?

Nearby, a group of the company’s higher-ups shifted uneasily and glanced around at each other.

Gingrich received an A or A- rating from the National Rifle Association, the leader of the gun lobby, throughout his Congressional career, his website says. That hasn’t prevented him from taking fire, though, from the far right. In Iowa, a robo-call paid for by a hardline gun-rights group, IowaGunOwners.org, bashed Gingrich for allegedly supporting the 1994 Brady handgun law that mandated waiting periods and background checks for people who buy firearms. A Gingrich spokesman said the Iowa group’s claims were incorrect.