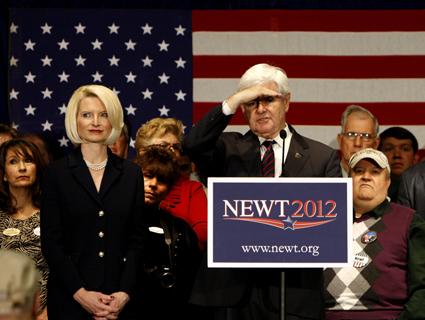 There are several different ways of dealing with a heckler: One is to ignore it, another is issue a passive-aggressive “Thank God for the First Amendment” line; on Friday night, Newt Gingrich went with option number-three—what I guess you’d call the “Chris Christie.”

No sooner had his speech aboard the USS Yorktown begun when an audience member shouted from the crowd: “Why won’t you release your ethics report? When will you release your ethics report?” Turning to face his inquisitor, Gingrich returned fire: “I you would do a little research instead of shouting mindlessly, you’ll discover that they’re online at the Thomas system, and you can print them out and read it. It’s about 900 pages, and when you get done reading it, let me know if you have any questions.” Boom. When the heckling persisted, Newt droped a zinger. “I assume you’re for the guy who won’t release his income tax,” he said, taking a shot at Mitt Romney.

The man continued shouting for a little while (countered by an “Off with his head!” chant from a woman right behind me, in reference to the heckler) and finally conceded defeat after a persistent “Go Newt, Go!” chant broke out. It was, in addition to being impolite, a pretty inartfully worded question, which Gingrich took advantage of to avoid the actual substance. There’s a difference between the ethics reports that are public record at Thomas, and the sealed documents from the Gingrich ethics investigation that are currently not public record. Gingrich has been less than upfront on the latter, which is part of the reason Romney is now demanding he release them.

The exchange was noteworthy, though, for the tone. Gingrich didn’t let the heckler off the hook; angry retorts are what propelled him to the top of the polls (the most recent one from Public Policy put him up nine points over Romney in South Carolina) and he believes this tone is going to keep him there, whether the victim is Juan Williams, John King, or an anonymous Romney supporter. “It’s not so much what’s wrong with the other candidates,” said Burnie Acufff of Charleston, when I asked him why he’s volunteering for Newt. “I feel that Newt has got the scar tissue and callouses to put up with Washington, DC.” He won’t sit back and take it, in other words.

On stage aboard the Yorktown, Gingrich did his best to present himself as a sober, seasoned, future commander in chief—serial abuse of Godwin’s law notwithstanding. The rally took place aboard the Yorktown, a decommissioned aircraft carrier which has been converted into a floating museum in Charleston Harbor and—should the occasion arise—possesses enough WWII-era bombers and old anti-aircraft guns to keep the Nazis off the beaches of the low-country until reinforcements can arrive. Gingrich delivered his remarks in front of a 30-foot-long American flag and just out of camera shot from the hanging innards of a Navy chopper, an old QH-50 with a 72 hp Gyrodyne-Porsch reciprocating engine. He was introduced by retired Marine Gen. James Livingston (a Medal of Honor recipient), who had switched endorsements from Rick Perry to Gingrich earlier in the week, and gave a nod to the ship’s history in the Pacific theater (making a quick “politically incorrect” joke about speaking Japanese). He began with a moment of silence for America and French soldiers who had recently been killed in Pakistan. 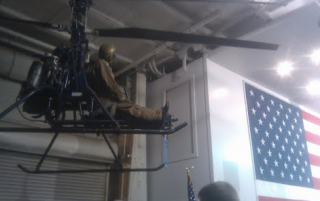 Photo by Tim MurphyAnd, flanked by his wife, Callista, and a troop of Boy Scouts (here on a field trip) he’d invited to join him on stage, Newt made his final pitch to South Carolinians: “I want you to know that should I be honored and have the opportunity to serve as president, I will take to the White House, the memory of this evening on this ship, and the courage of the man who introduced me, and the patriotism of the people who came here, and the young people to whom we owe the presidency, and I will dedicate myself to do everything that I can to make sure that they grow up in a country worthy of their future.” He left the stage to a chorus of “Newt! Newt! Newt! Newt!” For a moment it felt like 1994 all over again.

Of course, this being South Carolina, some military imagery was more tasteful than others. Gingrich’s first endorser at Friday night’s speech decided to kick off his speech with a little bit of history: “Charleston has been the place of a lot of historic firings, like the firing of the first shot at Fort Sumter,” said Bobby Harrell, the state’s Republican speaker of the house. “Tomorrow, we will do another firing—when we fire Barack Obama from the White House!”