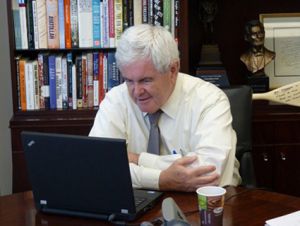 Newt Gingrich often says that, at heart, he’s still a four-year-old boy “who gets up every morning hoping to find a cookie that friends or relatives may have left for me somewhere.”

Thank goodness for Twitter, which has the democratizing effect of making almost all male elected officials sound like four-year-old boys bounding down the stairs in search of snickerdoodles—none more so than Newton Leroy Gingrich, whose verified account chronicled his every meal, TV appearance, and stray thought about electro-magnetic pulses and dinosaurs. (“If you have never seen dunkleostus the armored fish from the devonian you should visit cleveland museum of natural historu It is amazing”.) Or at least it did. As Vanity Fair‘s Juli Weiner noted, shortly before jumping into the presidential race in May, Gingrich quietly deleted his Twitter archive for 2009 and much of 2010.

Gingrich had an uneasy relationship with the micro-blogging platform. It was there that he’d called future Supreme Court Justice Sonio Sotomayor a “Latina woman racist” for touting her life experiences as a qualification for the bench. But he’d also given us a peek at his four-year-old side. On Easter of 2010, for instance, he live-tweeted his consumption of foil-wrapped chocolates. Fortunately, Wonkette grabbed a screenshot:

Update: Washingtonian has, like an 11th-century monk transcribing the works of the ancients, carefully preserved some of the early @NewtGingrich tweets. My favorite sequence:

@newtgingrich: Having a good lunch at the mcdonalds in osseo with callista and her mother bernita. Good crispy chicken sandwich, great fries, good coffee

@newtgingrich: Drugans restaurant and golf course in holman wisconsin has great food and a seven foot tall wooden troll. They do a wonderful job