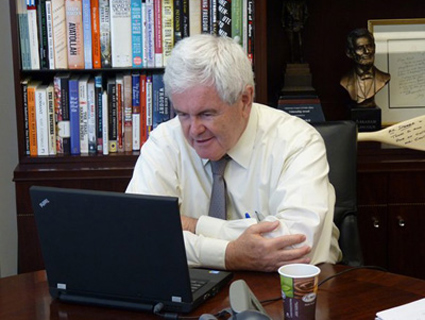 Newt Gingrich has always presented himself, with some level of accuracy, as one of the more tech-savvy voices in American politics. He anticipated the the transformative powers of telecommunications in the 1980s, and recognized that Congress’ attempt to ban pornography from the internet was a really dumb idea. In 1995, he became the first Speaker of the House in American history to sit down for a 6,500-word interview with Esther Dyson for Wired about the future of the Internet.

But as John Heilemann explained later that year, something didn’t quite add up:

[I]t’s hard not to feel slightly cynical. The slight grows as you discover that Gingrich is, in fact, something of a technological naïf. He has owned a laptop only since 1994, for example, and does not use e-mail, a fact that shocked [Bill] Gates’s people and, apparently, Gates himself—the billionaire made a point of explaining the importance of e-mail to Gingrich at their dinner. When you ask the Speaker how much time he spends roaming the Net, he answers, “Not as much as I’d like.” When you ask him what he does in those sadly infrequent moments, he falls silent for at least five seconds—an eternity for him—and then responds, blankly: “I play.”