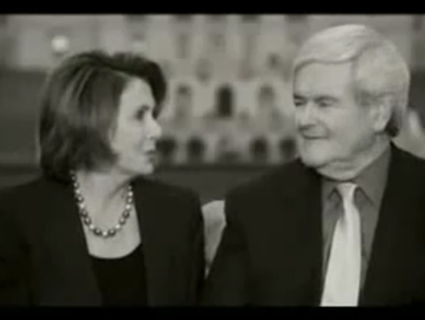 Before he campaigned against Agenda 21, Newt Gingrich cut this ad on behalf of Al Gore's non-profit, calling for swift action to combat climate change.<a href="http://www.youtube.com/watch?v=HE_A_LUCFws">GCrowdy</a>/YouTube

At Saturday’s GOP presidential debate, former Speaker of the House Newt Gingrich signaled to tea partiers that he is one of them by making an unusual reference to Agenda 21, the international compact that conservative activists believe is a stepping stone to a United Nations takeover. It was an odd subject to bring up at a debate that focused mostly on the Middle East and Central Asia, but as it turns out, Newt’s been beating this drum for a few months now. In September, the ex-Speaker promised an Orlando tea party group that, if elected president, one of his first acts would be to sign an executive order “to cease all federal funding of any kind of activity that relates to United Nations Agenda 21”:

In that speech, he explains that he hadn’t even been aware of Agenda 21 until he’d begun campaigning and been asked about it by activists. He offered a longer explanation of his views in July, which he felt strongly enough about to post to his YouTube stream:

It’s a United Nations proposal to create a series of centralized planning provisions, where all of a sudden your local city government can’t do something because of some agreement they signed with some private group who are all committed basically to taking control of your private property and turning it into a publically controlled property. Everywhere I go in the country today, people, particularly  the tea parties, are very worried about Agenda 21. It’s part of a general problem of United Nations and other international bureaucracies that are seeking to maintain an extra-constitutional control over us, and I reject that model totally. The United State is a sovereign country. The United Nations does not authorize anything for the United States, and the United Nations does not have any control of the United States, and we want to make sure that remains our core value as we go forward.

If you had to place money on which candidate would turn a benign pledge to promote sustainable development (one that was never even considered by the Senate) into a campaign issue, you would probably have put all of it on Rep. Michele Bachmann, who has spent much of her political career fighting against the invisible forces of the United Nations. Gingrich, though, is the only candidate to raise the threat explicitly during the campaign. So if this whole presidential thing doesn’t work out, he might consider entering the Florida Senate race.

One factor working against Gingrich, though, is that in between his departure from the House and his Presidential bid, he became an outspoken advocate for climate change legislation. Indeed, he went so far as to cut a television ad with House Minority Leader Nancy Pelosi (D-Calif.), calling for swift action on global warming. Acceptance of climate science doesn’t necessarily make you an instrument of Agenda 21, but many activists do see a clear link between global warming activism and the one-world conspiracy.