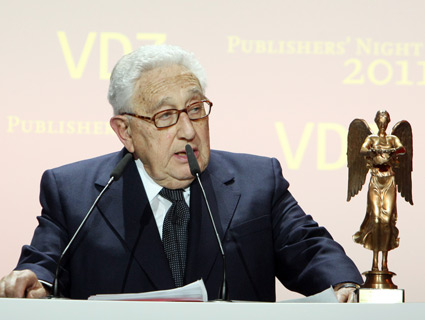 The AP reports, based on recently released State Department documents from late 1972:

The White House…sought to assure the American Jews that Nixon was very concerned about the plight of Soviet Jews, had taken up the issue with Soviet leaders directly…A White House official, Leonard Garment, saying he was flooded with letters and phone calls with Jewish appeals, asked Kissinger for help and guidance…According to transcripts released by the State Department, Kissinger…said to Garment: “Is there a more self-serving group of people than the Jewish community?” Kissinger is Jewish.

Garment, also Jewish, replied: “None in the world.”

At this point, Kissinger was quoted as saying “What the hell do they think they are accomplishing?…You can’t even tell bastards anything in confidence because they’ll leak it.” But Kissinger said he would take up the issue with Soviet Ambassador Anatoly Dobrynin and also meet again with Jewish leaders. “They ought to remember what this administration has done,” he said.

Let’s take a second to review the historical context: Following Israel’s decisive victory in the Six-Day War, there was a massive uptick in the emigration of Soviet Jewry from the USSR to the Jewish homeland. The desire to resettle was also fueled by the fact that anti-Semitism—in media, the education system, the work force, and so on—was, at the time, pervasive in the Soviet Union. Due to the USSR’s mangled, biased emigration process, many Jewish leaders, including then Israeli Prime Minister Golda Meir, sought the influence of the Nixon White House to secure safe travel for thousands of Russian and Eastern Bloc Jews.

There you have it: the bastard-ly, self-serving (and apparently loose-lipped) impulse of the Jew to escape mass persecution and cultural eradication.

Given some of Kissinger’s other Nixon-era remarks about Jews, these latest revelations aren’t particularly shocking. In December 2010, the New York Times reported that in the freshest batch of audio tapes released by the Nixon Library—which also include the former president making “disparaging remarks about Jews, blacks, Italian-Americans and Irish-Americans in a series of extended conversations with top aides and his personal secretary”—then-National Security Advisor Kissinger was recorded saying the following, after Golda Meir’s visit to the White House in March 1973:

So really, the latest Kissinger news is just more of the grotesque, unsettling same.