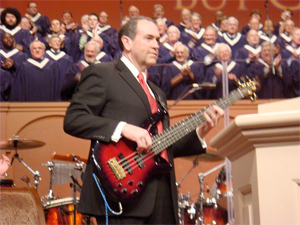 When The New Yorker writer Ariel Levy profiled Mike Huckabee for the magazine this week, Israel and Judaism came up. A lot. Huckabee, the ex-Arkansas governor, current Fox TV showman, and rumored 2012 presidential hopeful, had just made his 14th trip to the Holy Land. He spoke to Levy at length about his philosemitism—in fact, the profile starts with Huck and buddy Pat Boone (yes, that Pat Boone) um, praising the Hebrews, sorta:

Both men were wearing yarmulkes. “I think what I should do is convert,” Huckabee said, squinting in the sunshine. “This covers my bald spot completely.”

Huckabee was a Baptist minister before he went into politics, but, like Boone and most of the other people in their group, he is crazy about Israel and extremely enthusiastic about Jews. “I worship a Jew!” Huckabee said. “I have a lot of Jewish friends, and they’re kind of, like, ‘You evangelicals love Israel more than we do.’ I’m, like, ‘Do you not get it? If there weren’t a Jewish faith, there wouldn’t be a Christian faith!'”

Huckabee has a reputation as a good-natured jokester, but he turned deadly serious when discussing non-Jews in the Israeli vicinity, too:

“I have to be careful saying this, because people get really upset—there’s really no such thing as a Palestinian,” Huckabee told a rabbi in Wellesley, Massachusetts, at a kosher breakfast on the campaign trail in 2008. “That’s been a political tool to try to force land away from Israel.”

MoJo has a rich history documenting the rise of the so-called Christian Zionist movement, of evangelical Protestant conservatives courting Jews on the basis of a common fondness for the promised land. (We wrote here in 2004 how 7 in 10 white evangelicals believed Israel was “given to the Jews by God.”) But, as Huckabee’s yarmulke yukking (and the testimony of Texas firebrand pastor John Hagee) has shown, there’s something tenuous and possibly patronizing about the Judaica fetish exhibited by evangelical Christians—who, after all, believe that when the Lord comes, he may be coming to Israel, but he won’t be coming for its Jewish citizens.

So how about it, readers? Is Huckabee’s fondness for Judaism sincere and enduring, or is it a patronizing fetish?