Coal-fired power plants are responsible for two-thirds of air-borne mercury pollution in the US—more than all the other sources combined. In a new report out this week, Environment America looks at where most of that pollution is coming from.

Using data from the EPA’s Toxics Release Inventory, the report finds that Texas was the biggest emitter of mercury in 2010, spewing 11,127 pounds into the atmosphere. (Six of the top nation’s top 10 mercury emitters are in the Lone Star State. Fairfield, Texas is home to the Big Brown Steam Electric Station and Lignite Coal Mine, which together were responsible for 1,610 pounds of mercury pollution.) Texas dwarfed Ohio, the second-highest emitter, which emitted 4,218 pounds. Pennsylvania, Missouri, and Indiana round out the top five.

The report also found that five companies were responsible for more than a third of mercury emissions from power plants. American Electric Power was responsible for the most, at 6,200 pounds, followed by Luminant Generation Co., Southern Co., Ameren Corp., and NRG Energy.

Here’s where most of that mercury pollution is concentrated: 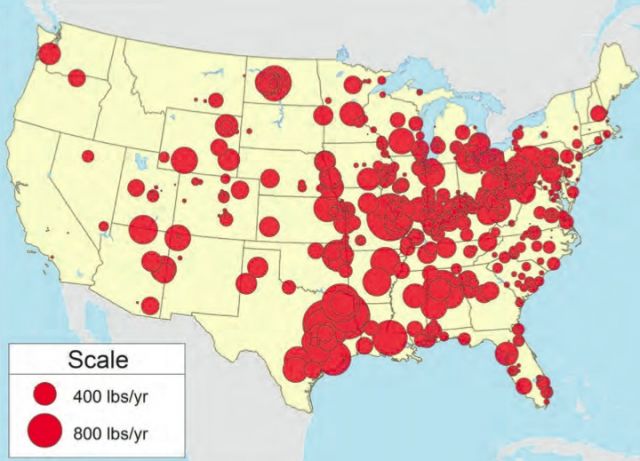 Mercury pollution is bad for people—particularly little people. Kids who are exposed to mercury while their brains are developing can have diminished verbal and motor skills and lower IQs. It’s also bad for women who are or are hoping to get pregnant. The March of Dimes notes that babies exposed to mercury in utero “can suffer severe damage to the nervous system and may die,” or they “may have brain damage, learning disabilities and hearing loss.” Studies have found that 8 percent of women of child-bearing age have dangerous levels of mercury in their bodies, and the EPA estimates that up to 300,000 babies born each year may be at risk of developmental problems because of in utero exposure.

Meanwhile, in Washington, congressional Republicans have tried to block the EPA from instituting new mercury rules.