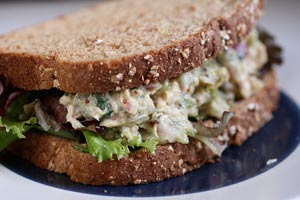 From the department of #butilovetunamelts comes this depressing news: The Consumers Union recently analyzed 42 samples of packaged tuna, and found that about half a can of white (albacore) tuna (which tends to have more mercury than light tuna) contains more mercury than the EPA’s recommended daily limit for women of childbearing age. A few other nuggets from the study:

Given the fact that mercury content varies dramatically from can to can, Consumers Union recommended in 2006 that the FDA issue a warning that some cans of white tuna may contain levels that exceed those on which the daily consumption recommendations are based. The agency hasn’t issued any such warning yet.

In light of its recent tests, Consumers Union recommends that tuna-eaters adopt a more cautious approach than the FDA recommends:

(For comparison, the FDA’s recommended limit for low-mercury seafood, including light tuna, is 12 ounces a week. For white tuna, it’s six ounces a week.)

Also worth noting: Bluefin tuna is not only one of the most mercury-laden kinds of tuna, it’s also one of the world’s most overfished sea creatures. A recent bad decision on 2011’s bluefin tuna quotas means this struggling fish is now even worse off.

Wondering which fish are healthy for you and the planet? I like Food and Water Watch’s Smart Seafood Guide.