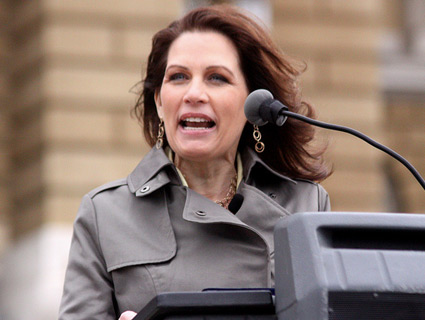 At Saturday’s CBS News/National Journal “Commander-In-Chief” debate, 2012 Republican candidate and tea party darling Michele Bachmann recited two very popular memes on the American right: A) Barack Obama is a devoted follower of Occupy Wall Street, and B) he wants to feed Israel to the dogs.

Given Bachmann’s patented kicked-into-overdrive tendency to say and endorse pretty out-there stuff, neither comment came as much of a shock. However, let’s just get some quick debunking out of the way.

As much as many in the GOP would like to tie the president to Occupy Wall Street, the so-called “support” is tenuous at best. What conservatives have seized on are quotes like this:

“Obviously, I’ve heard of [Occupy Wall Street], I’ve seen it on television. I think it expresses the frustrations that the American people feel…I think people are frustrated and the protesters are giving voice to a more broad-based frustration about how our financial system works.”

The president also said the following when asked about the protest movement in mid-October:

In some ways, they’re not that different from some of the protests that we saw coming from the Tea Party. Both on the left and the right, I think people feel separated from their government. They feel that their institutions aren’t looking out for them…The most important thing we can do right now is those of us in leadership letting people know that we understand their struggles and we are on their side, and that we want to set up a system in which hard work, responsibility, doing what you’re supposed to do, is rewarded.

Not exactly a resounding endorsement; just a politician’s attempt at empathy. (Occupy protesters, meanwhile, have nixed virtually all positive mention of Obama from Zuccotti Park and erected effigies of the president.)

Lastly, it’s fairly obvious that Obama does not want to defriend Israel. Despite talk of the “Jewish backlash” that supposedly came from his recent unflattering comments about Israeli Prime Minister Benjamin Netanyahu and his mention of 1967 borders early in the summer, the Obama administration has stayed steady on military aid, played it super-safe on the Palestinian bid for statehood, and expressed Washington’s “ironclad” commitment to Israel’s security over and over again.

If Israelis aren’t supposed to “see a friend” in President Obama, then, according to recent polling, somebody forgot to tell the Israelis.