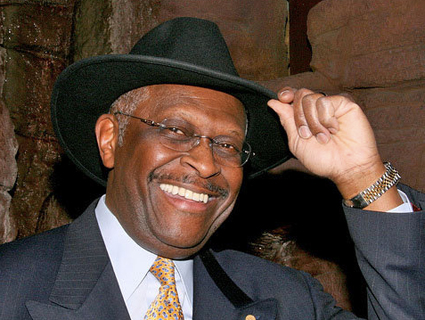 GOP Presidential candidate Herman Cain has an Islam problem. The former Godfather’s pizza godfather put his foot in his mouth early in his campaign when he told Think Progress he wouldn’t appoint any Muslims in his administration (which would be unconstitutional), and again when he said Rep. Keith Ellison (D-Minn.) wasn’t loyal to the Constitution because he’s Muslim, and again when he said he has never encountered an American Muslim who is loyal to the Constitution, and then again when he denied ever saying any of those things and blamed the media.

Now he’s given up on walking back his statements and returned to his roots. On Thursday, Cain made a campaign stop in Murfreesboro, Tennessee, the Nashville satelite that’s become a ground zero for the anti-Islam jihad. At the center of the controversy is the Islamic Center of Murfreesboro, a local mosque that has been trying to expand its facilities. Opponents have alleged that the the mosque is secretly waging a (very, very) stealth jihad against the people of Middle Tennessee. The construction site has been subjected to arson, and the project itself was challenged in court by opponents who argued that Islam is not a religion and therefore is not entitled to First Amendment protections (The Justice Department said otherwise). Cain, evidently, agrees with the Murfreesboro anti-mosque activists:

Cain didn’t bring up the controversial facility in a campaign rally on Thursday, but told reporters afterward that he’s concerned about the Islamic Center of Murfreesboro.

“It is an infringement and an abuse of our freedom of religion,” he said. “And I don’t agree with what’s happening, because this isn’t an innocent mosque.”

Cain decided very early in his campaign that to have any sort of impact, he needed to stake out a position on the far right. But now, as Politico notes, he’s now gone so far to the right he’s gone back in time to August, 2010, when the number-one threat to the country was the construction of a mosque in downtown Manhattan.