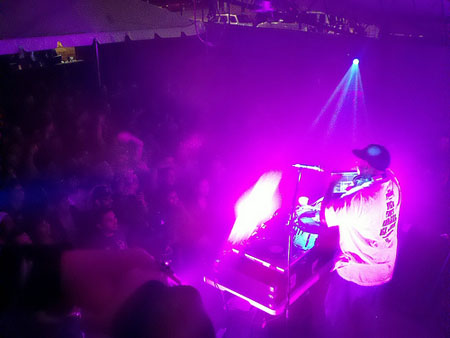 For beat junkies and fans of jazz and retro hip-hop, the September 30 battle between Pete Rock and DJ Premier at San Francisco’s Mighty nightclub was nothing short of epic. Beyond collaborating in the past with an impressive rolodex of artists, including Kanye West, Jay-Z, Big L, J Dilla, Wu-Tang Clan, Rakim, Nas, and Notorious B.I.G., these guys have graced the best of the best lists for beat makers two decades running. To top it off, both are the remaining halves of some of the genre’s greatest jazz-rap combos: Gang Starr & Pete Rock & CL Smooth. The sheer star power was enough to push the crowd’s adrenaline off the charts.

Following a brief tour of hip-hop history courtesy of opener DJ Shortkut, smoke machines ushered in a set change, and Premier and Pete Rock took over, serving up a goody bag of improved beats, club bangers, and individual scratch sessions as they took turns passing the proverbial mic.

They spun each other’s classic material (“T.R.O.Y,” “Full Clip”), laid down 1986-era Beastie Boys tracks, remixed classic soul and R&B crowd pleasers (including cuts from James Brown’s funky people—like Maceo & The Macks “Soul Power ’74”  and The JB’s “You Can Have Watergate.” They even took a 15-minute diversion into classic TV themes like this and this.

Both of these producers are masters at weaving the horn improv into a heavy beat or taking a guitar lick and melding it with a spontaneous freestyle. Gang Starr, consisting of DJ Premier and the late Guru, helped pioneer the fusion of jazz and hip-hop. “Words I Manifest,” the first track they ever recorded, sampled Dizzy Gillespie’s “Night in Tunisia.” Check it out below.

Pete Rock is a maestro of remaking cuts from classic jazz, soul, and funk records for the hip-hop crowd. Coming up as a DJ on Marley Marl’s radio show back in 1987, he hooked up with high school friend CL Smooth to produce two critically acclaimed albums: Mecca and the Soul Brother and The Main Ingredient. The two went their separate ways after their second album, and Rock went on on to produce tracks for rap luminaries such as Nas (“The World is Yours”) Heavy D & The Boys (“Blue Funk”) and allegedly gave Puffy the sample for Notorious B.I.G.’s “Juicy.” Rock also shines on his solo endeavors—“Lost and Found: Hip-Hop Underground Soul Classics“, “Soul Survivor”—where his jazz-infused productions seamlessly meld fanning horns with weighty bass notes.

The two genres ” have flirted with each other on numerous occasions,” notes music journalist Jared Pauley. “In the 1990s, popular hip-hop acts took jazz samples…this trend continued as jazz artists began incorporating elements of hip-hop into their music.” For an example, look no further than Herbie Hancock’s Future Shock, a 1983 crossover album that saw the legendary pianist assembling tracks with turntables and synthesizers.

Madlib, one of the most prolific hip-hop producers to date, launched Yesterday’s New Quintet, Sound Directions, and Shades of Blue, three projects that dusted off classic jazz standards and fused them with blunt-drenched hip-hop sounds. Pete Rock did the same in 1999 with Diggin’ On Blue, although his repetitive mouthing over the tracks can wear thin on a listener’s patience.

Premier, meanwhile, teamed up with renowned saxophonist Branford Marsalis for “Jazz Thing,” part of the soundtrack to Spike Lee’s Mo’ Better Blues. They later collaborated on Buckshot LeFonque, a supergroup that bridged hip-hop, jazz, funk, and soul sensibilities. But Marsalis told Pyramid West that he had to lay down some ground rules. “Quit thinking of yourself as a turntablist, and think of yourself as a piano player,” Marsalis recalls telling his partner. “[Premier’s] real musical, so he could do it. So when were doing that song ‘Breakfast at Denny’s,’ it’s a call and response—you can’t just be scratching any old thing. You’ve got to find sounds that work with what I’m playing and you’ll have to respond to what I’m doing.”

The strength of the battle between Pete Rock and DJ Premier ultimately boiled down to just that—the call and response, that back and forth that pervades jazz and hip hop. Their divergent styles and bearing did create a bit of friction at times. But no matter, the art was in the improv.