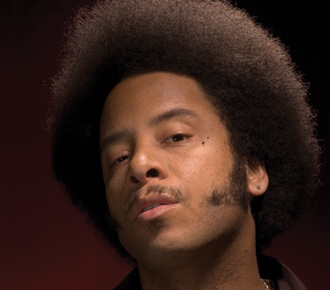 It’s been a few years since we last checked in with Raymond “Boots” Riley, front man of the Coup—a funk and hip-hop group known for its humor, intelligence, and in-your-face agitprop. Steeped in radical street politics, the Oakland, California-based group has been shaking things up for two decades with albums like Kill My Landlord, Genocide & Juice, Steal This Album, and Party Music—which gained notoriety for songs like “5 Million Ways to Kill a CEO,” but revealed a softer Riley in cuts like “Wear Clean Drawers,” a heartfelt facts-of-street-life for his baby daughter. The band’s 2006 Epitaph album, Pick a Bigger Weapon, which made Rolling Stone‘s Top 50 albums of that year, includes the track “BabyLet’sHaveABabyBeforeBushDoSomethin’Crazy.” Nowadays, besides raising three kids and working on new Coup material for an indie film, Riley is collaborating with Rage Against the Machine’s Tom Morello in a newer group called the Street Sweeper Social Club. For a Mixed Media special in our November/December issue, I asked him about his recent projects, favorite tunes, and the joys of fatherhood.

Mother Jones: You’re working on your first new album since 2006, right? Give us a taste for where it’s headed, thematically.

Boots Riley: Actually, I put out an album in 2009 and an EP in August 2010 with Street Sweeper Social Club. The next album by The Coup will be the soundtrack to a movie that I’ve written, and in which I play the lead. It’s a dark comedy with magical realism inspired by my days as a telemarketer. It’s called Sorry To Bother You.

BR: Kanye West, Good Ass Job. I heard his a cappella version of “Mama’s Boyfriend” on the Internet and I’m extremely excited by the prospect of good songwriting, great beats, and a concept album, as opposed to just a collection of songs.

MJ: How about a release outside your genre?

BR: 1. Stevie Wonder, Songs In The Key Of Life
2. Prince, Controversy
3. Michael Jackson, Off the Wall

BR: I don’t ever feel guilty about anything that I like. Okay, yes I do: “Bed Intruder Song” from Auto-Tune The News.

BR: Public Enemy, It Takes A Nation Of Millions To Hold Us Back

MJ: You have a teenage daughter and two young sons. How has being a father changed your worldview?

BR: Becoming a father made me a lot more sentimental than I ever was before. I never cried at movies before I became a parent. I feel music more intensely. I think of my political ideas as ideas about how I want to interact with other human beings as opposed to abstract theories about how the world should be.

BR: The Dino 5, Marlo Thomas & Friends’ Free To Be…You And Me, and Captain Underpants

MJ: Do you let the younger ones listen to your records, or only the songs with no cussing?

BR: The cussing is how I get them to listen to my lyrics!