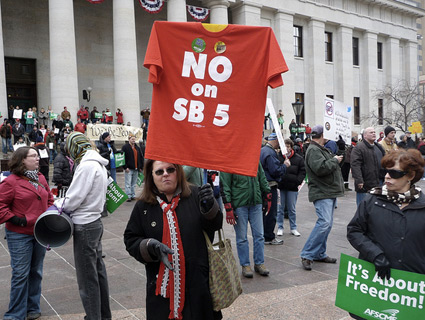 Judgment day is just around the corner for Ohio Gov. John Kasich’s anti-union bill. On November 8, Ohioans will vote on whether to repeal Kasich’s SB 5 legislation, which slashes collective-bargaining rights for more than 350,000 public employees. A slew of independent advocacy groups are already barraging voters with pro- and anti-SB 5 messaging, pumping millions of dollars into TV ads, mailers, lawn signs, door hangers, town halls, and more.

Read Mac McClelland’s feature on middle-class life in Ohio under Gov. John Kasich as well as MoJo‘s coverage of the SB 5 repeal fight.

The outfits joining the SB 5 slugfest include Americans for Prosperity and FreedomWorks, heavy-hitting conservative groups with deep ties to the tea party activists; powerful labor unions; the corporate-funded Republican Governors Association; and shadowy political committees, including the Alliance for America’s Future, run by a daughter of Dick Cheney. Catherine Turcer, who runs Ohio Citizen Action’s Money in Politics project, estimates that $20 million could be spent on the SB 5 fight; other estimates go as high as $40 million. (Nearly $35 million was spent by all candidates in Ohio’s 2010 gubernatorial election.) Spending totals will become clearer after Thursday’s campaign finance deadline for the referendum, but even then, some groups don’t have to reveal their finances at all. “Voters know that an incredible amount of money is being spent on this during a recession,” Turcer says.

Leading the charge in defense of Kasich’s anti-union bill is Building a Better Ohio, a political action committee. At least three former Kasich aides, including his ex-chief of staff, work for the group. BBO has flooded airwaves with television ads in support SB 5, including the infamous “GrannyGate” ad, in which the group recut an anti-SB 5 ad to make the opposite point, sparking a statewide furor. Another BBO ad argues that government workers are overpaid compared to private-sector workers, citing a study written by the conservative American Enterprise Institute think tank and commissioned by business groups that support SB 5, including the Ohio Chamber of Commerce. (Fact-check sites have repeatedly debunked this claim.) BBO also sponsored a recent talk by former presidential candidate Mike Huckabee, who stumped for upholding SB 5 and told the bill’s supporters to deflate the car tires of those voting for repeal.

By law, BBO doesn’t have to disclose who donated and how much they gave. The group has said it will disclose the names of its funders on Thursday but will not reveal how much was given. “With Building a Better Ohio, Ohioans are really in the dark about which individuals, which corporations, who is actually supporting this bill,” Turcer says. (Building a Better Ohio did not respond to multiple requests for comment.)

Spearheading the other side of the fight is We Are Ohio. The union-backed group argues that public workers in Ohio sacrificed plenty in wages and benefits before Kasich’s anti-union bill and that SB 5 unfairly guts workers’ rights. We Are Ohio has churned out TV ad after ad assailing SB 5 and urging its repeal, claiming that the bill hinders the ability of firefighters, teachers, and other public workers to do their jobs. When BBO recut We Are Ohio’s ad featuring great-grandmother Marlene Quinn urging repeal of SB 5 so that it suggested that Quinn supported the bill, We Are Ohio got the ad pulled from at least 30 TV stations throughout Ohio.

We Are Ohio, unlike its nemesis, will disclose its financials on Thursday. According to a July filing, the group raised $7.3 million, much of it from the Ohio Education Association, which chipped in $5 million to defeat SB 5. The Dayton Daily News reported that We Are Ohio had outspent Building a Better Ohio by a 5-2 margin on TV ad time through mid-October, $1.92 million to $741,000. Reached Thursday night, Melissa Fazeckas, a spokeswoman for We Are Ohio, declined to provide new fundraising and spending figures until the group filed its latest report on Thursday.

The remaining outside money landscape in the SB 5 fight is much more murky. Consider the Alliance for America’s Future, a Virginia-based outfit that has pledged to spend “over seven figures” defending SB 5. AAF has churned out mailers dragging President Obama into the fight over Kasich’s bill. One reads: “Obama’s policies are FAILING OUR COUNTRY. OBAMA wants us to do things HIS WAY? Yes on Issue 2 is our chance to do things OUR WAY!”

Alliance for America’s Future doesn’t reveal any of its funders. Its website is a single page listing a generic email address, and last fall, when Mother Jones arrived with a camera at the Alliance’s listed address in Alexandria, Virginia, a man who refused to identify himself said the group’s employees were out to lunch and, later, shooed us away. (The Alliance did not respond to a request for comment.)

Then there are the tea party-associated groups Americans for Prosperity and FreedomWorks. AFP’s Ohio branch scheduled more than a dozen town halls across Ohio, organized phone banks, and urged supporters to send auto-letters to TV stations defending Building a Better Ohio’s controversial “GrannyGate” ad. (Officials with AFP’s national office and Ohio branch did not respond to requests for information about their spending.)

Earlier this month, FreedomWorks trumpeted its “aggressive grassroots campaign” to uphold SB 5. A key architect of the tea party, FreedomWorks said it’d already distributed “tens of thousands” of yard signs and door hangers supporting SB 5 through six distribution centers set up around the state. YesForJobs.com, a website created by FreedomWorks, lets Ohioans download absentee ballots, lists addresses for mailing those ballots, and includes downloadable pro-SB 5 signs. And FreedomWorks will also provide get-out-the-vote activists with pro-SB 5 information. (FreedomWorks did not respond to requests for information on its Ohio spending.)

Rounding out the dark money bonanza is Make Ohio Great, an Ohio group bankrolled by the Republican Governors Association. According to an October 9 Associated Press story, Make Ohio Great had spent $441,000 on TV time in Ohio’s five largest TV markets—Cincinnati, Cleveland, Columbus, Dayton, and Youngstown. That is chump change for Make Ohio Great’s sugar daddy, the RGA, a powerhouse in state politics that spent $132 million during the 2010 election cycle. Ohio’s Kasich benefited from $11 million in RGA support in 2010, with the RGA describing itself as “a key investor” in Kasich’s win. And the RGA’s donor list for the 2012 election cycle is a highlight reel of major corporations: Koch Industries ($1,025,000), Citadel Investment Group ($500,000), Blue Cross Blue Shield ($275,000), and Perry Homes ($250,000), the homebuilding company owned by GOP fundraiser extraordinaire Bob Perry.

The result of this money barrage, says Catherine Turcer, is a perplexed electorate that will struggle to parse the hidden agendas behind the ads, mailers, websites, and other messaging that will hit the state in the run-up to the November 8 election. “Even if voters wanted to be able to connect the dots, they’re not able to,” Turcer says. “We should all be able to follow the money and to understand who contributors are and to understand the source of information. Yet voters are left in the dark in this election because we don’t have access to that kind of information.”