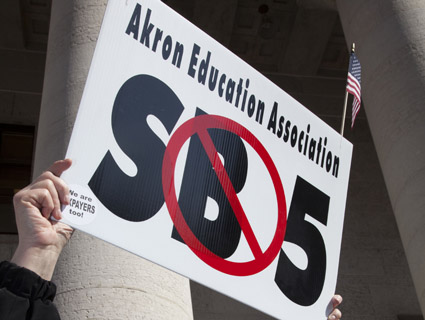 A group defending Ohio Republican Gov. John Kasich’s anti-union bill, known as SB 5, sparked controversy this week when it grabbed footage from an opponent’s ad supporting a repeal of the legislation bill and then used that same footage in an ad fighting the repeal. At the center of the debate is Issue 2, a ballot referendum on Kasich’s bill to curb collective bargaining rights for public-sector unions. Ohioans vote on the referendum in early November. Marlene Quinn, the grandmother whose pro-workers rights comments were skewed to look like she supported Kasich’s bill, called the tactic “dishonest and downright deceitful,” adding that she felt “violated”; at least 30 TV stations in Ohio have pulled the ad. Politicos have dubbed the controversy “GrannyGate.”

Gov. Kasich, however, stands behind the group that cut the controversial ad, Building a Better Ohio. Referring to the group’s tactics, Kasich told the Columbus Dispatch this week that “what they’re doing is fine.”

Building a Better Ohio, whose staff includes Kasich’s former chief of staff, has repeatedly defended the fairness of the ad and the tactics used to make it. “We’re certainly not taking the ad down,” spokesman Jason Mauk told the Cleveland Plain Dealer. “We absolutely stand by it and our right to air those arguments. Opponents of Issue 2 used a personal story to make a political argument, and we believe we’re entirely justified in using that same story to advocate for the reforms of Issue 2.” Mauk added in a different statement, “We’re absolutely not conceding our position. We have every right to broadcast this ad. The person featured in the ad is a public figure.”

Here’s the first version of the ad, put out by the pro-union group We Are Ohio:

Here’s the recut version, from Building a Better Ohio:

Former Ohio Gov. Ted Strickland, a Democrat, told the Associated Press that Building a Better Ohio’s ad was “really as blatant as anything I’ve seen.” He added, “It will say something about the character of the governor and others, if they do not, in my judgment, step up and very publicly say that this is wrong and disassociate themselves from it… I think it could be the turning point in the campaign, quite frankly.”