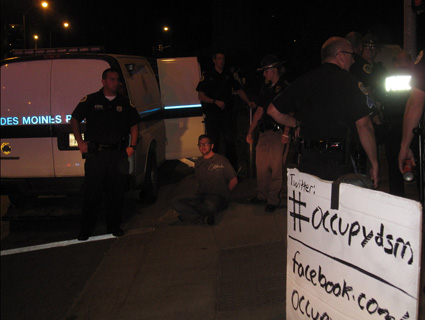 #OccupyWallStreet came to Iowa last week, with organized efforts in at least seven cities to date. It all began without incident in a park in Iowa City, where police checked in only to “protect us from possible drunk students walking by,” according to one participant. But Sunday night, outside the state Capitol in Des Moines, officers arrested at least 30 adults and two minors after protesters refused to vacate a swath of state property they’d temporarily claimed as “People’s Park.” Claims of police misconduct were promptly flying about on Twitter.

At around 10:30 p.m., witnesses say, some 200 Iowans were peacefully protesting the cozy relationship between government and corporate America (not to mention the Fed) when two dozen Iowa State Patrol and city police announced that they intended to enforce an 11 p.m. curfew on state property.

When the officers returned half an hour later, about 100 people locked arms, says David Goodner, a longtime social-justice activist. Goodner was the first person arrested when police began to forcibly subdue protesters, at least one of whom was pepper-sprayed. Others, according to people at the scene, received scrapes and bruises as police dragged them away.

“I’ve never seen that many people arrested for an act of conscience in all my time working for social change in Des Moines,” says Ed Fallon, a local radio show host and former Democratic state legislator who was among those arrested. (Disclosure: I volunteered on Fallon’s gubernatorial campaign in 2006.) “What’s unique about this is the Occupy Wall Street movement has spread to the heartland.”

IowaPolitics.com shot this video of the arrests. Fallon is the man in the cap being arrested 15 seconds in.

Terry Branstad, the state’s Republican governor, defended the officers’ actions. At a statehouse news conference Monday morning, he said the police “acted in an appropriate and restrained manner.” (Iowa State Patrol Sergeant Scott Bright told me that officers “didn’t have any conversation with the governor” prior to the arrests.) Branstad went on to criticize the protesters. “I think we’ve got to be careful about casting blame and attacking people who we want to invest and create jobs,” he told reporters. “I’m very concerned about not sending the wrong signals to the decision makers in business.”

“We absolutely disagree with the governor,” says Goodner, who calls the arrests a clear example of “excessive force”—although he admits that staging the protest on state property was an intentional attempt to “pick a fight with a bigger guy.” After speaking to me from the Des Moines office of the grassroots reform group he works for, Iowa Citizens for Community Improvement, Goodner handed off the phone to Marcus Tipton, a senior at Iowa State University in Ames.

Tipton doesn’t belong to any activist groups, but was inspired, he told me, when his father said that Occupy Wall Street looked like this generation’s version of the civil rights protests that he once took part in. Tipton was “right there on the front lines when they were stormed by state patrol” but intended to leave as soon as an officer demanded it.

When that happened, he said, “I unlinked my arms from everybody. I put my hands up and said, ‘I will go. I do not want to get arrested.’ And as soon as I did that, [an officer] pulled out his handcuffs.” At that point, Tipton sat back down and grabbed the arms of two nearby protesters. “Then there were a bunch of hands on me pulling me. I was lifted up off the ground and slammed into the ground. I have a gash on my face and both of my knees are banged up.” Upon arrival at the Polk County jail, he adds, officials denied him medical treatment—an account Fallon, who spoke with Tipton there, backs up.

When I recounted the story to Sergeant Bright, who was not present at the park, he replied that the “only use of force we had last night was the pepper spray. That’s all I was told about. There were no other incidents that were reported.” The protesters, he added, “were warned at least three times before 11 o’clock. We have a responsibility in our department to enforce the laws, and that’s what we were doing.”

The Des Moines Register reported that police arrested 37, but Bright says the paper got it wrong. The official arrest count stands at 32, including two minors. (The youngest is 14, according to people familiar with the situation.)

Protesters met at People’s Park again on Monday night, avoiding arrest. They plan to apply for a permit for an indefinite stay—even though Branstad nixed that notion in his morning news conference. Goodner, who also attended the Iowa City protest when it began last week, says he thinks there’s “some fairly sophisticated communication going on between the two camps” and that both will continue their efforts, whether or not Branstad approves.

UPDATE, Tuesday, October 11: On Tuesday afternoon, Occupy Des Moines participants met with city officials and received a temporary permit, which you can view here in PDF form, to stay in People’s Park 24/7. The permit expires Friday, October 14, at 11 p.m., but David Goodner says that’s probably for “practical purposes” with the “understanding there will be a renewal process.” Goodner says that protesters made it clear to city officials that without the permit there would inevitably be dozens more arrests. “I don’t think they want that to happen, and we don’t either. I think the permit situation is kind of a compromise.”