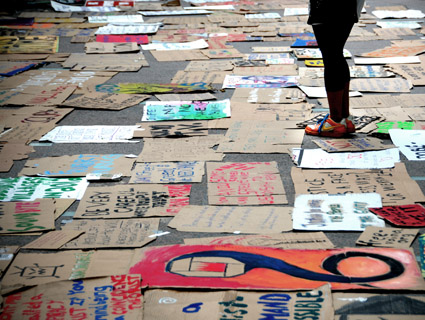 At Zuccotti Park, the shoebox-shaped spit of land in lower Manhattan that for three weeks Occupy Wall Street has called home, there are signs everywhere—strewn on the ground, taped to trees, thrusted skyward, hand-painted on the bulging belly of a pregnant mom. Their messages run the gamut: “We Are the 99%,” “Jesus Is With The 99%,” “Get Wall St. Off Welfare,” “Corporations Are Not People,” “Eat the Rich,” “End the Fed,” “Marx Was Right.” A flattened pizza box became a peace offering: “Why can’t the Ron Paul People and the Karl Marx People Get Along?” You get the picture.

One name, however, is nearly absent: Barack Obama.

In recent years, you could expect Obama to feature at gatherings of this sort—his organizers were signing up volunteers in the crowd, his war policies were under attack, his supporters were urging him on with his health care reform bill, and so on. Not Occupy Wall Street. There are no “Yes, we can” or “Sí, se puede” chants. No Obama ’08 T-shirts or stickers or posters. There’s just a single passing mention of him in the latest issue of the Occupied Wall Street Journal, the official newspaper of Occupy Wall Street. Many protesters, asked about Obama and his near-absence at Occupy Wall Street shrugged indifferently, or dismissed the president as just another politician, or ignored the question. And it’s not just this weekend: Signs of Obama are nowhere to be found in the videos and photo albums chronicling the weeks-long Occupy Wall Street protests.

So why no Obama? To an extent, it reflects Occupy Wall Street’s DNA. The uprising has no president—nor, for that matter, does it have an official spokesperson, a board of directors, or any defined hierarchy. “Occupy Wall Street is a leaderless resistance movement,” the group’s pamphlets explain.

That resistance to singling out any one person, for criticism or praise, came through in talking with those who helped lay the groundwork for Occupy Wall Street. These organizers and activists wouldn’t even credit themselves for their work; in the case of two Spanish organizers, Begonia S.C. and Luis M.C., they wouldn’t even give their last names for fear of looking like publicity seekers. “This is not about one person; it’s about the group working together,” Begonia insisted to me.

It’s no surprise, then, that a leaderless, autonomous protest wouldn’t concern itself with a public figure like Barack Obama, not like the progressives and environmentalists who gave him money, time, and heaps of praise in 2007 and 2008. Indeed, over the weekend, there were few displays of support for any individual at Occupy Wall Street, partly an indication of how many Occupy Wall Street protesters had sworn off politics altogether—anarchists who despise the system, unemployed men and women who dislike all politicians, Democrat or Republican. The exception was Rep. Ron Paul (R-Texas), the Republican presidential candidate and staunch libertarian whose supporters yelled his name and hoisted his signs at the corner of Broadway and Liberty Street. And even then, the Paul diehards sounded more interested in dismantling the Federal Reserve and electing Paul than anything to do with Occupy Wall Street.

Another reason, protesters told me when asked about Obama’s absence, was simmering disappointment with the president. Frustrations included: a bank bailout that didn’t rescue underwater homeowners; an economic team seen as too cozy with Wall Street and too distant from the lives of ordinary Americans; a health care reform bill without a public option.

Unlike in 2011’s other progressive groundswell, in Wisconsin this winter, Obama simply isn’t part of the discussion at Occupy Wall Street. On the streets of Madison, the state capital, rumors flew that, any day now, Obama would make an appearance at the protests to help their cause; imagine, they said, how much of a boon the president’s imprimatur would be. When he didn’t show up, there was anger at the president who, as a candidate in 2007, promised to “walk on that picket line” with workers denied their collective bargaining rights.

Occupy Wall Street doesn’t want Obama’s help. That Obama sympathized with the protests hardly registered with those camped out in Zuccotti Park. And the protesters scoffed when the president suggested they should support his American Jobs Act. “He doesn’t get that this isn’t about a bill, or a person, or a single policy,” says Marina Sitrin, an author and activist who’s been involved with the protests since September.

Georgia Sagri, an artist who helped organized the group that preceded Occupy Wall Street, the New York City General Assembly, says the movement’s animating idea is about getting people away from thinking that merely supporting a candidate is enough to make change. “Everybody’s used to reacting to things, but not to acting or speaking or making decisions on everyday things and politics,” Sagri says.

No doubt plenty of those in Zuccotti Park supported Obama in 2008, but now, Sagri suggested, people are carving out a path of their own to address the problems ailing the working and middle classes—one that doesn’t focus on, say, an inspirational leader like Barack Obama. You could see and hear it in the crowd. “Standing Up For The Change We Voted For,” an older man’s sign read in the October 5 march in which labor unions and community groups joined with Occupy Wall Street in the streets of Manhattan. Or as 31-year-old John Wells, a call-center worker who showed up at Occupy Wall Street, put it: “We tried to vote change, and that wasn’t good enough. We’ve got to shout change!”