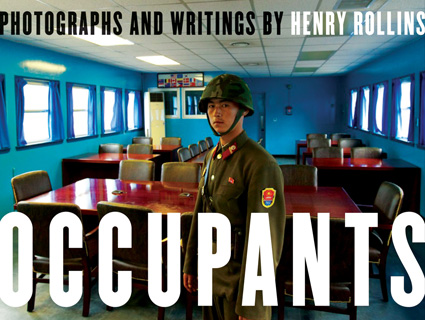 In the years since the iconic SoCal punk band Black Flag‘s 1986 break-up, former front man Henry Rollins has toured college campuses with spoken-word performances, hosted radio shows, honed his acting chops as a white supremecist on the AMC series Sons of Anarchy, and campaigned against homophobia and hunger. He’s also spent years traveling the globe to observe the devastation wrought by what he calls the “backhand of capitalism.” On those trips, he began carrying a camera—first a simple point-and-shoot, later more professional equipment—and compiled a collection of “some amateur’s travel images.”

That candid assessment of his visual artistry, curiously, is printed as part of the introduction to Occupants, the latest of Rollins’ several books, but his first foray into photojournalism. His snapshots span eight years of journeys across the Middle East and Southeast Asia, China, India, and parts of Europe and Africa. They are alternately bleak (a crying infant crawling on bags of trash in Indonesia; an old man who may or may not be alive covered in flies in India), hopeful (kids laughing while playing in the street in Bangladesh), and coldly opulent (Saddam’s abandoned palace in Iraq and another palace very much in use in Riyadh, Saudi Arabia).

The PR materials tout the book as “photojournalism at its best,” but Rollins is undeniably correct in his self-critique: These are simple shots taken with an untrained eye, and his early point-and-shoot photos are of such low resolution that they don’t even fill a quarter of the page. Not wanting to appear naive or self-serving, Rollins explains in the introduction why he still published them: “I thought it would be pretentious to release a book that only had photographs. My fear was that someone might think this was a vanity project…So I decided to write something for every photograph. I would look at the photograph and see where it took me.”

The photos took Rollins—who told me he drew inspiration from “heartbreak, anger, and depression”—into the dark recesses of his soul. Writing in the voice of a tyrant, he mocks his subjects: “See that our clown is kept clean,” he orders a female McDonald’s employee in Thailand who sweeps the tiles by a Ronald McDonald statue. “Do you know how fucking stupid you look in that uniform? It’s made from American spit.” Elsewhere, Rollins bluntly conveys his anti-capitalist rage through them: “I mean, everyone knows Ayn Rand was a cunt, even the cowards who still pathetically affix themselves to her pseudointellectual bullshit know that,” he writes next to an image of a one-legged man crawling along a rainy Bangkok street. 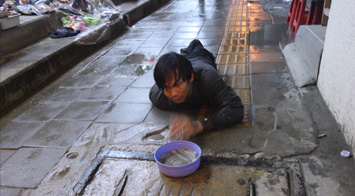 Thailand 2008: “Where’s my upgrade? I am entitled to my upgrade!”: by Henry Rollins

In the back of the book, he affixes more traditional captions to thumbnail versions of his photographs. Often, they raise more questions than they answer. Rollins says he felt “completely removed” from most of the people he encountered. He would leave the comfort of his hotel room by cab early in the morning, and then wander wherever his curiosity took him before finding his way back by foot in time for dinner. He did this even in places like Iran and Syria, armed only with a smile and a simple one-liner: “I’m here to meet you.”

“I kind of roll the dice on humanity not killing me,” Rollins says. “I have never felt like a tough guy. I’m not looking for a fight. I’m not in any way brave. I am insanely curious, and well aware that life is really short, and I am looking to have an extraordinary life. I work at it.”

Still, Rollins never escaped the cognitive dissonance between his temporary situations and the permanent realities of the people he photographed. In Bangladesh, he could see his hotel from the slums. While he camped in the Sahara desert region of Mali, a place he describes as “projectile-vomit hot by noon” and “35 degrees by midnight,” he still felt voyeuristic. “A mere visitor, that’s all I’ll ever be in these places,” he told me. “I don’t know how to escape that.” Even a longer stay, he figures, would just be “like something on one of those Fox reality shows.”

Whether Rollins’ style of writing lessens the pretentiousness he’d hoped to avoid, or adds to it, is an open question. Intense and entirely lacking in subtlety, his written voice will be familiar to fans of his previous books and spoken word performances. His writing often wanders off point, which makes it read more like an angsty punker’s personal diary than a coherent photoessay. 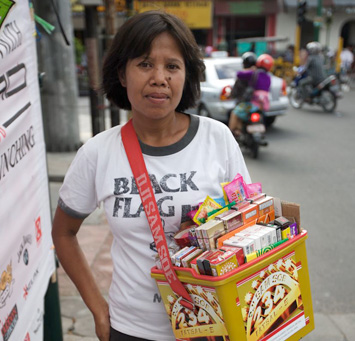 Indonesia 2009: “You will pay me to poison you, strip you of your identity, murder your culture, bleed you slowly, kill you off, and then start in on your children.”: by Henry Rollins

Either way, Rollins’ cynicism and passion are genuine. Even if he can’t figure out quite how or why, he wants to make the world a better place—just two weeks ago he returned from Port-au-Prince, Haiti, where he volunteered with the relief organization Drop in the Bucket. He supports the Occupy Wall Street protests, but says, “If someone with their crappy little sign is going to get in the way of basically the force of the universe, I think you need a minimum of 3 million people.” A glutton for punishment, Rollins says he just read George W. Bush’s memoir (“It’s unreal, the world this guy lives in—basically, I think he’s trying to avoid the Hague”).

“My hope—which is a word that I don’t like—is that young people will see the errors of the ways of their parents, and they’ll throw off the chains of homophobia and racism, and they’ll embrace the truth of global climate change and they’ll seek to be the generation that circumvents a total breakdown of how pretty much everything works in the world,” Rollins says.

As for Occupants, it “ended up being this really arduous project,” he says. “That kind of writing, for me, is not easy. It was very painful and very challenging.” Ultimately, he says, his goal was to create a book that showed he was “really burning some lean tissue here trying to make this thing as impactful as possible.” As a $35 coffee-table reader that some uninitiated readers will no doubt find off-putting, the real challenge may be to get it into the hands of readers who aren’t already among the Rollins faithful.