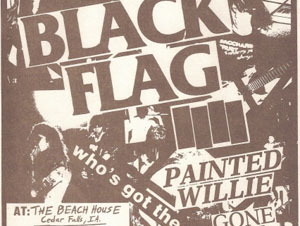 Black Flag’s grueling tours are the stuff of legend. The band spent months at a time on the road, booking shows as it went, with certain band members reportedly eating dog food because they were that broke.

While front man Henry Rollins documented the rigors of touring with one of punk’s best-known bands (Get in the Van), filmmaker David Markey captured the band’s final, six-month trip across North America in 1986. Though the film, Reality 86’d, carries a 1991 copyright, Black Flag founder/guitarist and SST label owner Greg Ginn never gave permission for it to be released. The doc is legendary within certain circles, but not even bootleg VHS copies could be had.

Markey says, “I decided after 20 years just because one man [Ginn] doesn’t want the world to see something doesn’t make it right.”

Earlier this month, using the power of the internet to slip around Ginn’s notoriously tight fist, Markey posted his film on his vimeo page. As a cultural document, it’s pretty cool. It recollects a particularly awkward moment in the history of punk, with the luminaries of the first ten years (Ramones, The Sex Pistols, Black Flag, Minor Threat) winding down or long gone and the next big wave (Green Day, Nirvana, Fugazi) still in its gestation stage.

As a movie, though, it leaves a bit to be desired. There’s no real narrative or structure. Just jumping in a van with a bunch of guys, capturing the tedium, bad inside jokes, reactions of fans and passersby, philosophical conversations, and plenty of live footage. It’s very meandering, not unlike The Rolling Stones’ 1972 tour doc Cocksucker Blues—minus the groupies, planes, and copious drugs. And like Cocksucker Blues, it’s cool to see—at least once anyway.

UPDATE: Greg Ginn has since gotten the movie pulled from Vimeo.