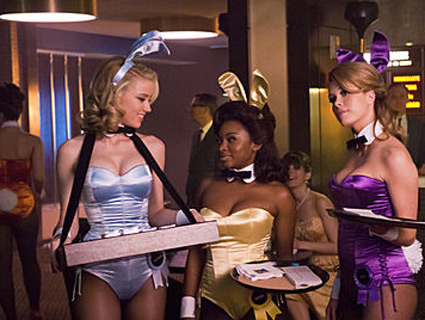 The Playboy Club, the new NBC drama series that premieres Monday at 10 p.m. EST, has already provoked a salvo of pre-emptive controversy. Back in June, the interfaith nonprofit Morality in Media led the charge for a boycott after determining—without having seen the show—that the series would “contribute to the sexual objectification and exploitation of women and encourage greater acceptance of pornography.” The group’s president Patrick Trueman also said that “sexual exploitation has its cost and its time the promoters of such harm feel the pain.”

Feminist icon Gloria Steinem, who famously went undercover as a Playboy Bunny in 1963, accused the series of normalizing “prostitution and male dominance” and whitewashing “horror stories” of the rough conditions and the rougher chauvinism of the Playboy Clubs and Playboy Mansion.

And the Parents Television Council weighed in with the most overtly political statement, declaring that the NBC program “underscores the critical need for President Obama to direct the Justice Department to appeal the Second Circuit’s obliteration of the broadcast decency law,” and that “[i]f the administration fails to act, broadcasters will be given the green light to air indecent programming at any time of day, even in front of children.”

But for all the bad publicity over skimpy Bunny costumes framing ample cleavage on network TV, the series’ pilot proves that the outrage was monumentally overblown and that the show is actually rather tame.

The Playboy Club, set in the early 1960s before radical became chic, follows Maureen (played by the fresh, talented Amber Heard) as she navigates her way through the exclusive Chicago Playboy Club as the newly minted “cigarette girl.” In the fast-paced pilot episode, the audience gets a glimpse into the sybaritic milieu of 3 a.m. pool parties, naughty women, and the men who lust after them. Packed tightly into the 42-minute running time are: closeted lesbians, a slain gangster, blood splattered all over a Bunny, public sex, and a performance by Ike and Tina Turner.

The plot can be summarized as such: Bunny Maureen accidentally slices open the jugular of a handsy mob boss with one of her high-heels (yes, that’s right), and big-city lawyer Nick Dalton (played by Eddie Cibrian) helps her cover it up and get back to a life of carousing at the Mansion with the other jolly Bunnies. A state’s attorney election and sexual politics subsequently unfold in multiple subplots.

Hearing the elevator pitch for this series must’ve been pretty swell. Unfortunately, the potential goes untapped. The prospect for a sleaze-filled guilty pleasure or a gritty, frank examination of the era is torpedoed by the show’s soap opera slant. The melodrama never quite sizzles, stalled by generally underwhelming acting and a cookie-cutter script. Possibly the least enviable aspect of the writing is the dialogue, which sounds like a rough blend of the guys club confab of Mad Men and the chitchat from season three of The O.C. Just try absorbing one of the many spectacularly failed attempts at dry wit: “Smart? Who needs ‘smart?’ You’re the only man I know who puts his hand up a girl’s skirt looking for a dictionary,” the nightclub manager says to Dalton as the pair blow smoke rings and sip Alka-Seltzer while talking about the women.

One of the very few bright spots is actress Amber Heard (Pineapple Express, Zombieland, and the hugely underrated slasher flick All the Boys Love Mandy Lane), who does her best to portray the fun, sassy side of shattered innocence. Unfortunately, the writers’ room didn’t give her that much to work with; the fact that it takes just one day for Maureen to get over killing a man with her shoe does not bode well for character development.

It’s pretty clear that NBC—a struggling network trying to get its hit-drama groove back—wants to sell this show on risk-taking and novelty. The snag here is that the premiere doesn’t take a single identifiable risk, and dodges every opportunity to be truly provocative or original. There is little to be wowed or offended by, simply because there is so little to care about.

Note to Ms. Steinem: A boycott would be giving this show far too much credit.